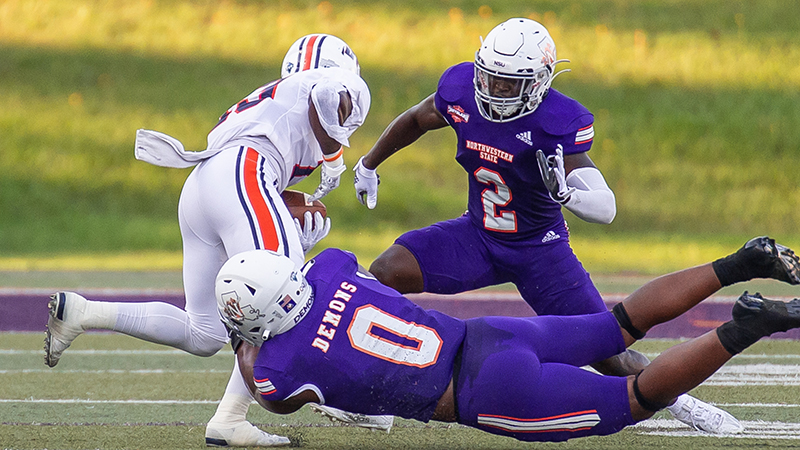 When the NCAA announced it would start allowing football players to wear the No. 0, Northwestern State Head Coach Brad Laird said he knew he wanted to give the number a special meaning. In college, two people can wear the same number as long as they play on opposite sides of the ball. Laird wanted to give the number to players he saw as leaders with high character and already had a player in mind.

The head coach said former Memorial linebacker Jomard Valsin, who is now a junior for the Demons, checked every box for his criteria.

“I wanted to make it different and special,” Laird said of the idea of players wearing No. 0. “I wanted there to be a reason. Then I started jotting down what I wanted that zero to resemble. One of them is taking care of their business off the field, whether it is in the classroom or in the community. It would also be for their leadership ability. It does not need to be a vocal leader. It can be someone that leads by example. Third, is the contribution on the field.

“You see guys who guys who have one or two of those three. Whenever I looked at the team, it was good to have choices, but I felt Jomard best represented it for the defense.

Valsin said he the announcement was an honor.

“It is a tremendous feeling,” Valsin said. “I had to work my way up. The leadership plays a big part for the guys under me. I want them to know that they can do this, too. I just want to lead the way for the younger guys.”

“I want to win conference and go to the playoffs and see my teammates get the dreams they want,” he said.

Valsin said growing up in Port Arthur played a huge role in his development.

“It definitely played a factor in making me tougher,” Valsin said. “It prepared me for everything I am going through right now and the next step. My mom played a big factor in that. She stepped up and played a big role in my life. My dad did, too, but my mom is a soldier. Just seeing her do that made me stronger.”

Valsin was also a member of the 2017 basketball team that won state.

“That impacted me a lot,” he said. “It showed me that if you put the work in, there will be a reward. We ended up winning state, but people don’t see the hard work that was put in to get there. I carried that with me.”

Valsin said his welcome-to-college-football moment came during his first practice.

“The first workout we did 40 50-yard sprints,” he said. “I wasn’t prepared for that. It shocked me a bit. Also, there was a pass play at practice and a guy was pass protecting. I was rushing off the edge and he hit me. That was the hardest hit I felt in college.”

Laird said he recognized that Valsin could be special as a freshman.

“The initial thing he was able to showcase was his ability to rush the passer,” Laird said of Valsin. “He was able to get in on pass downs to utilize that ability. That really popped out a lot.”

The linebacker does not fit the stereotype of a college football player, who takes “easy classes” to stay on the field. He majors in Industrial Engineering and plans to become an engineer if his dreams of playing in the NFL do not pan out.

Laird said he could tell that Valsin is not in college just to play football.
“He is here to get his degree,” Laird said. “He knows what he wants to do when football is no longer an option. That is just how he was raised. The character speaks for itself.”

Valsin said he wants to encourage younger football players and students to keep working towards their dreams.

“Just keep working,” he said. “If I could do it, you definitely can do it. I am a kid from Port Arthur. I was there looking up to somebody.”

Valsin said he watches all of the Memorial games that are live streamed and continues to root on his alma mater.