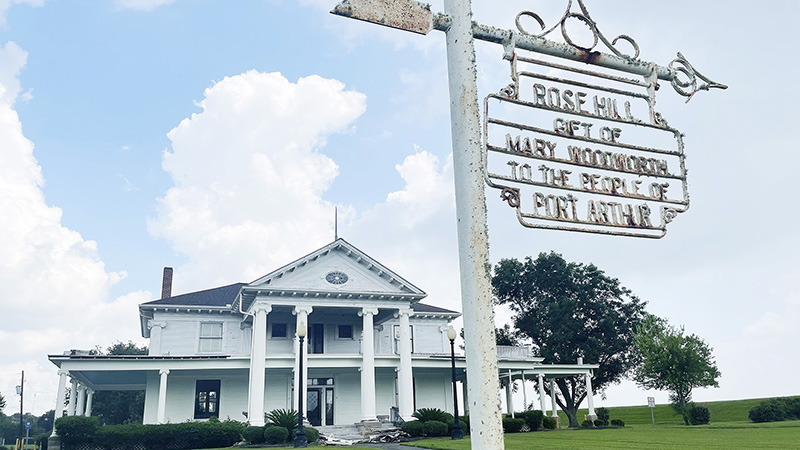 The historical Rose Hill Manor sits at the end of Woodworth Boulevard near the present-day seawall. (Monique Batson/The News)

One of the oldest historical landmarks in Port Arthur will undergo another round of renovations after last year’s summer storms left significant damage to its exterior.

“There are a lot of needed repairs at the building,” Civic Center Director Adam Saunders said in a memo regarding Rose Hill Manor, saying the railing and surface of the second level deck were damaged in Hurricanes Laura and Delta.

“Since the damage to the railing has caused an unsafe environment, the repairs need to be completed.”

Built in 1906 at 100 Woodworth Boulevard near the present-day seawall, the historical landmark has 14 rooms — four bedrooms, four bathrooms, and three fireplaces. Following the deaths of Rome Hatch and Mary Woodworth, the mansion was left to the City of Port Arthur.

It is on the National register of Historic Places, and has served as a venue for weddings and parties.

The LaBiche Architectural Group, known for help with renovation of historical structures, sought bids for the project this summer and on Aug. 5 made recommendations to City Manager Ron Burton.

Of six companies, only two submitted bids. It was recommended that N&T Construction of Beaumont be awarded the work at the cost of $180,000. The second company, American Restoration, submitted a bid of $211,000.

Funding will come from a hurricane account specifically tied to the 2020 storms.

“We have past experience in working with this company and have experienced successful working relationships in the past,” Dohn LaBiche told Burton in the bid recommendation letter.

Following Tuesday’s approval by the Port Arthur City Council, a notice to proceed will be sent to the contractor.

Other Historical Landmarks in Port Arthur: