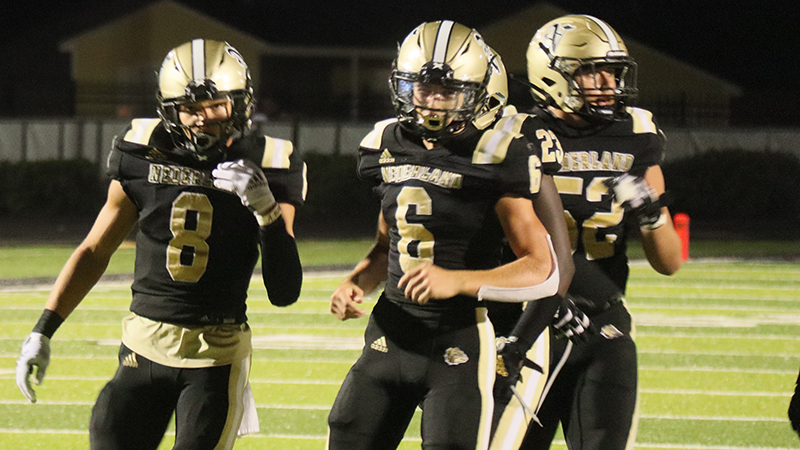 NEDERLAND — Last season, the Nederland defense put together some impressive performances on its way to a deep playoff run.

Gage Driskell played a key role in the Bulldogs’ success as a member of the linebacker rotation. This season, he is starting next to second team all-state linebacker Jaice Beck and on a team that had a big makeover after a significant portion of the players graduated.

Driskell, who is also the team’s backup quarterback, comes from a lineage of Nederland football players.

“He is a smart football player,” Head Coach Monte Barrow said. “He is a tough player and he gets that honest. I was fortunate to coach his dad. When we talk about players that we have had going back, his dad was pound-for-pound one of the best football players we had. He wasn’t big in stature. He played fullback and some cornerback. Gage gets that trait from him.”

Defensive coordinator Chris Theriot said Driskell is not scared to put his body into harm’s way.

“He doesn’t look like your normal (middle) linebacker, so I know he is not scared,” Theriot said. “He is experienced. We asked him to do a lot on defense last year. He is very intelligent. He understands the game.”

Barrow thinks Driskell sees playing along side Beck as a challenge.

“He has a knack for the football,” Barrow said. “I think playing next to Jaice helps him a lot. He may have a little chip on his shoulder because offenses are going to run at him more than Jaice, but he is one of those kids that steps up to that and has been a good surprise for us at the linebacker position.”

While Driskell is undersized, his speed allows him to cover a lot of the field quickly, Theriot said.

“He is pretty laid back,” he said of his linebacker. “He is never too high or too low. He plays at an even keel. I think that meets his personality also, which is good. Gage is a great kid. His stature doesn’t have to be like Jaice’s. You have to be able to run from sideline to sideline and he can do that. He is not afraid to get his body in there if he needs to.

Driskell and the defense were part of Nederland’s last victory in a come-from-behind win over Silsbee. The Bulldogs were down 21 points in the fourth quarter before rattling off 28 unanswered points.

The defense came up with an interception to seal the victory for the Bulldogs.