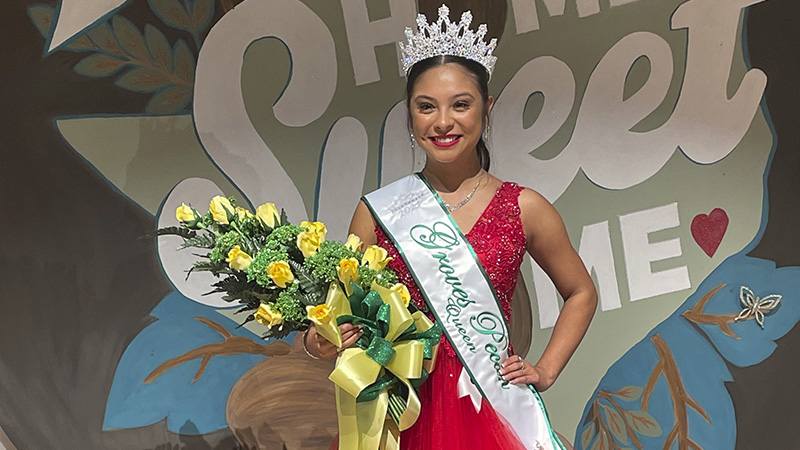 PORT NECHES — Isabelle Colin fell in love with pageants when she was 6 years old after watching a ’90s movie.

“I saw Miss Congeniality on TV and knew I wanted to do that,” she said. “I told my mom and she mentioned there were little pageants we could do. We went to the store and bought a dress. I ended up winning and was hooked from there. I just wanted to keep doing it.”

Colin was named Pecan Festival queen this weekend as well as Most Photogenic.

“I love what it stands for,” she said. “Not so much the beauty of it, but I love the interviews. That is always my favorite part. I love talking about my personality and answering all of the questions.”

Colin said the craziest question she received in the interview process was what book she would read if she was stuck in a library for a night.

“I never expected to be asked that, but I chose ‘The Great Gatsby,’” she said. “I wrote a literary analysis over it, so I feel really connected to the book. It is such a great story, and Fitzgerald’s work is amazing.”

Colin is drawn to the book because of her love of the Roaring 20s. She enjoys the extravagance of the era and the ambiguity of the story.

She had won in all of the Pecan Pageant levels, adding two Miss Photogenic titles in the past two years, as well.

“Growing up, ever since I was little, I have always looked up to the queen,” she said. “For me to get that title, I was speechless. I was so honored to represent Groves.”

Riding in Saturday’s parade has an extra benefit to Colin this year. The high school senior is also a cheerleader who injured her ankle during practice when another girl landed on it. The cheerleaders typically walk the parade route, but Colin will get to ride in a car as the queen.

Colin has injured her ankle three times, but said it has not deterred her from cheerleading.

“I have torn my ligaments each time in my ankle,” she said. “The first time, I was sitting on shoulders, and the girl bumped me off on the pylon and I landed on the pylon and slipped on the grass sideways. The second time, I was running on wet turf, slid and it went sideways again. The last time, we were doing toe touches and a girl landed on my ankle and it was the bad ankle, so here we are. But I love cheer. I don’t think I would be the same person without it.”

Colin also has a love for the Spanish language. It is her favorite class and she can speak fluently thanks, in part, to her grandmother who spoke it when she was alive.

After she graduates, Colin wants to attend Lamar University to pursue a career in the nursing field.

“I have always had a heart for helping others,” she said. “I also want to cheer for the National Cheer Association over the summer and work some camps.”