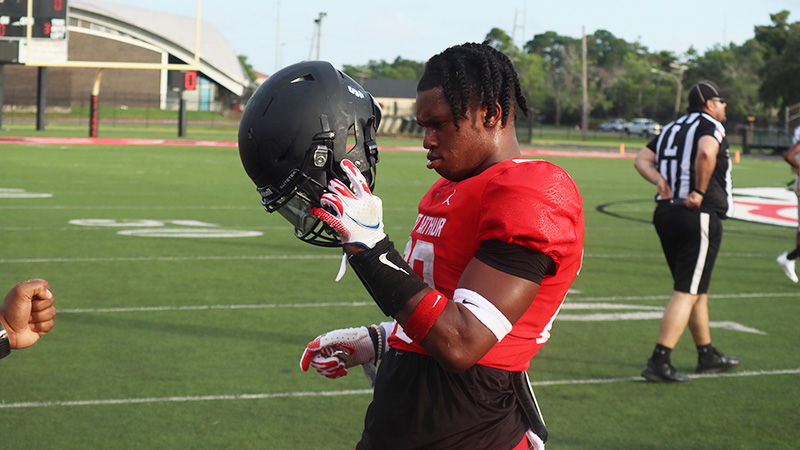 Memorial running back Adrian Hayward is a threat to run or catch out of the backfield. (Chris Moore/The News)

Titans Head Coach Brian Morgan said Hayward is an X-factor for his team with the ability to do it all on offense.

“He catches the ball unbelievably well out of the backfield,” Morgan said. “We try to throw it to him as much as we can. He is like having another really good receiver on the field even though we line him up in the backfield. He has been solid running the ball and running it hard.”

Hayward said his favorite class is economics, but his size forces opposing defenders to make their own business decisions.

Hayward worked on being a more aggressive runner in the offseason. The work seemed to payoff in the Titans’ season opener against Lancaster. Hayward put together a highlight reel play when he met a defender in the hole with a vicious stiff arm that set the other play straight to the ground, while the running back gained extra yards.

Listed at 5’11” and 215 lbs., the punishing back can also be elusive. Hayward said the favorite play of his career came in the Titans’ last game against Crosby.

“Week by week, I work on my running game,” he said. “All summer and during workouts, my whole mindset was to get the ball, get vertical, run hard and get positive yards. Last game, I hurdled a guy. I was going to the flat and Jah’mar (Sanders) threw me the ball. I made one dude miss and there was a dude in front of me. I was thinking I was going to run him over. When I got to him, he got low and I just went over the top.”

Hayward’s hands are still his greatest weapon as he is again near the top of the team in receptions.

“He continues to grow each week, and you can definitely see how much he has improved from last year,” Morgan said. “I think he is first or second in receptions to (Illijah Williams) right now this season.”

Hayward leads the district with 17 receptions, followed by Williams with 16. The running back averages 14.6 yards per reception.

When he is not playing football, Hayward is trying to help his little brother, who is on the JV team, be a better running back.

“He has to take over after I leave,” Hayward said. “It is only right. We are always competing. If we aren’t, something is wrong.”