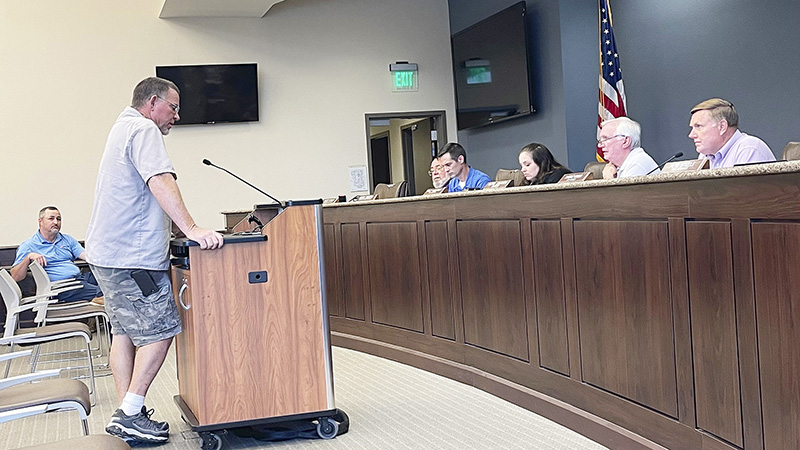 Roger Britnell, who owns a home on Herring Avenue, speaks to the Port Neches City Council during a public hearing regarding the replat of five lots on Bowlin Avenue. (Monique Batson/The News)

PORT NECHES — A request to turn five empty lots on Bowlin Avenue into new homes ran into a bit of opposition Thursday night as residents on a neighboring street brought flood concerns before the City Council.

While most concerns were about flooding, other questions were raised.

“I live directly behind those lots and I just want to make sure that it’s housing and not apartments or townhomes,” said Judy Perkins.

“That property is zoned single-family and that’s what the intent is — for five lots, five single family homes,” City Manager Andre Wimer answered.

Johnsye McDonald was in attendance and said his intention was to sell the homes after they were developed.

Regardless, that didn’t ease the concerns of several Herring Avenue residents.

“We’ve never had the drainage issues that we’re having now,” said Roger Britnell, who owns a Herring Avenue home with his wife Melanie. “We’ve been renting the property out for some time.”
Britnell said the couple had 10 loads of sand brought onto the property at the start of hurricane season, and dug a ditch to help with drainage issues.

“I have lived there since 1988,” Melanie said. “Right now I’m not living there but I rent the house out. It’s still an asset to me. And if my house ever in Bridge City floods, I’ll be back. It’s a sentimental house to me. And water has come on my porch now where in Harvey it did not. And I’m worried.”

Public Works Director Taylor Shelton said, according to the most recent legislation, it’s a requirement for the person developing the lot to ensure water drains properly into ditches at the front of the residence and not behind.

Neighbors, he said, cannot allow water from their property to be shifted on each other.

“I’m all for people developing,” Melanie said. “I like the houses; they’re beautiful. But I didn’t want it encroaching on mine without me having problems.”

The Council voted to approve the replats, but agreed that building plans had to comply with drainage rules and plans would be inspected to ensure that was addressed.