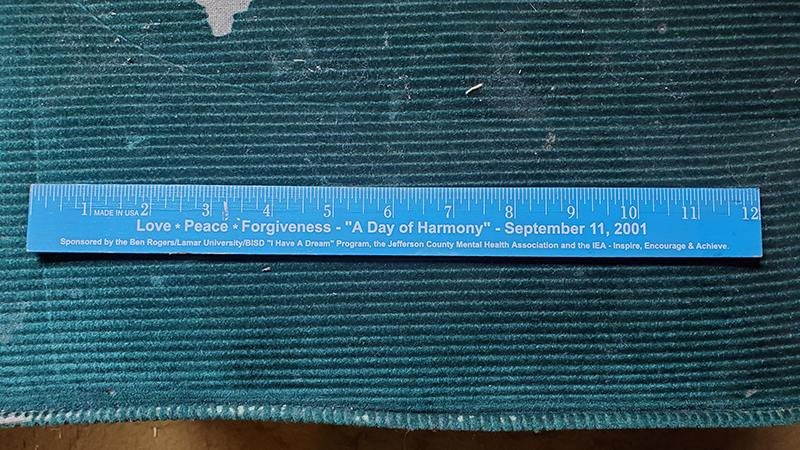 The TV specials and various shows on streaming services likely are not as popular this week as they were last week, when our nation took a look back at the carnage and loss of life.

We are back to normal, so to speak.

Just days before this grim anniversary I was going through some old boxes of saved items and tossing the stuff I no longer had use for. That’s when I found the blue ruler given to members of the press at an event promoting peace.

There wasn’t anything special about the ruler. It’s canary blue with white lettering and numbers and measures the standard 12 inches. On the ruler, which was “Made in USA,” was “Love-Peace-Forgiveness – A Day of Harmony” – September 11, 2001.”

Yes, you read that correctly.

That morning after dropping the kids at school I began getting ready for work when I saw the news of the first plane hitting one of the towers. Seemed unusual but maybe it was a relatively new pilot and he or she accidentally hit the building. Then I watched, off and on as I got ready for work, and saw the second plane hit and was shocked but did not have a grasp of what I was seeing.

I was still new to my job with a year of experience under my belt and in my mid-30s. My main worry was to get to Lamar University-Beaumont for “A Day of Harmony.” The event, sponsored by the Ben Rogers/Lamar University/Beaumont ISD “I Have a Dream” Program, the Jefferson County Mental Health Association and the “inspire, Encourage & Achieve” program brought 8,000 middle school students from Port Arthur and Beaumont together to hear the story of two men who were unlikely allies.

Azim Khamisa and Ples Felix of the Tariq Khamisa Foundation spoke of The Forgiveness Project whose mission is to stop children from killing children.

Khamisa’s 20-year-old son Tariq was shot and killed while delivering pizzas by a 14-year-old gang member, Tony Hicks. Hicks was later sentenced to 25 years in an adult prison according to the story I wrote when I covered the event.

Azim Khamisa reached out in forgiveness to Ples Felix, the grandfather and guardian of his son’s killer and the two have, since forming their organization in 1995, continued to work towards peace.

During their talk they briefly mentioned the events of that Sept. 11, 2001 morning.

“It’s important to do much more work to focus on behavioral thought pattern,” Felix told the thousands of students seated before him. “We live in a world full of violence. Look at this morning’s devastating violence in New York and Washington D.C. Children need non-violent, caring, compassionate role models.”

The men were careful not to stray too far into talk of the terroristic acts and focused instead with getting their message of peace and forgiveness across, likely realizing the students would forever be changed by the attacks on the nation and of the message meant to keep children from killing children.

I kept the ruler not so much for the novelty of the date and words of peace but as a reminder of where I was when it all happened. Can we, as a nation, one day find harmony?