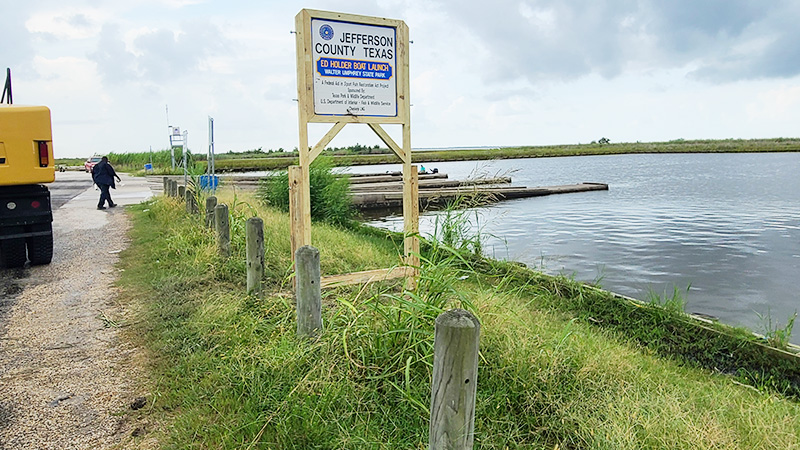 A view of the sign and the boat ramps. (Courtesy photo)

A sign at the boat ramp leading to some of the best salt-water fishing along the upper Texas coast now bears the name of a man who dedicated much of his life to conservation and the great outdoors. 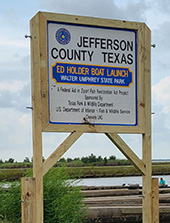 There are plans for a dedication ceremony at some time in the future.

Sinegal explained the boat launch was created on land donated by the recently deceased Walter Umphrey. The initial set of the ramps — there are several at the site — had a design flaw, where part of the concrete was underwater during high tide, leading to damage to boats.

“When it was new construction, there was an $85,000 boat with a busted hull because it was high tide,” Sinegal said.

This was not a problem during low tide as the concrete area was visible.

A contractor was brought in and the ramps redesigned.

Jefferson County Judge Jeff Branick has fond memories of Ed Holder from childhood on through the years.

Branick grew up in what was once Pear Ridge, now a part of Port Arthur. Holder lived behind the Branicks a few doors down, and he was friends with his children. Holder later served as a pilot for Branick’s law firm, and he would have the opportunity to fish and hunt with Holder.

“When Walter Umphrey purchased the land (near Keith Lake) and donated it to the county, where the boat launch is located, one of his requests was at that time for it to be named after Ed Holder,” Branick said.

After a long delay and in keeping with the promise to Umphrey, the boat launch was named after Holder, he said.

“We’re obviously pleased to do that for someone who was a wonderful sportsman and conservationist and who leant a lot of enthusiasm and education in the outdoors community through his writing,” he said.

“He suggested naming it after Ed Holder because (Holder) was such an intricate part of the Texas Parks & Wildlife and gaming, a longtime, well known sportsman,” Sinegal said. “I thought it was a great idea and petitioned the court to name the boat launch for the contributions he made.”

Holder, who died in 2005, was also the outdoors writer for the Port Arthur News for many years and a member of the Outdoor Writers of America, Texas Outdoor Writers Association and the Sabine Neches Conservation Club. Several outdoors awards have been named in his honor for outstanding efforts in conservation, including for the waterfowl habitat.

Holder served on a number of committees.

In August 2018, the Museum of the Gulf Coast hosted an exhibit “The Great…Outdoors with Ed Holder” featuring the former writer, photographer and outdoorsman’s works.

His son, Fred Holder, told the Port Arthur News how his father was big on lobbying for parks so that you wouldn’t have to have a license.

“If you’re taking your family, it should be cheap,” he said. “It should be free. There would be special rules for if you went with your family. It should be easy and fun, instead of having to buy a crabbing license, frogging license and all of these different licenses. For someone just working, the rules get so complicated, people give up.”

The previous curator for the Museum, Sarah Bellian, said Holder was a passionate advocate for conservation.