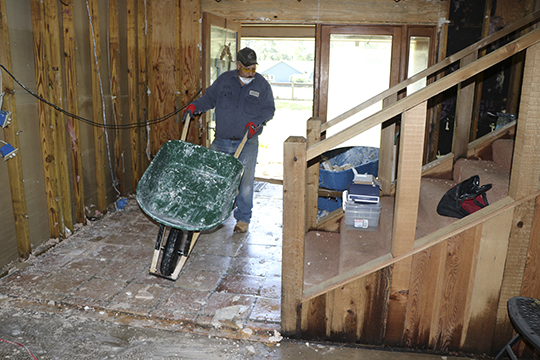 Valero employees muck out a home damaged by flooding after Hurricane and Tropical Storm Harvey. (Special to The News)

A group of community activists from Jefferson County, Harris County and individual cities within have filed a Title VI complaint against the Texas General Land Office and the United States Department of Housing and Urban Development after a distribution of Hurricane Harvey recovery funds eliminated some of the hardest-hit areas by the 2017 storm.

Texas Housers and Northeast Action Collective announced the news Wednesday through a live-streamed press conference, where a multitude of speakers said the aforementioned departments excluded black and brown communities when distributing available funds.

“I appreciate Texas Houses for going forward with this complaint because our rights are being violated according to Title VI,” said John Beard, founder and CEO of Port Arthur Community Action Network. “We are not receiving the proper treatment we should have.”

Title VI, put in place in 1974 under the Civil Rights Act, “prohibits discrimination on the basis of race, color, or national origin in any program or activity that receives Federal funds or other Federal financial assistance.”

“Next to Houston, Port Arthur was the most seriously-affected city with Harvey when that occurred. But yet we’ve had smaller communities receive far more money per capita than our city has and our people have,” Beard said.

In April 2020, the GLO announced its first round of Harvey funding, and allotted more than $6.5 million to Jasper County.

“This community was overwhelmed by Hurricane Harvey as heavy rainfall caused flooding of streets and homes, threatening public health, safety, and welfare,” the GLO said in a written statement at the time.

According to the National Weather Service, Jasper County measured between 20-40 inches of rain during Harvey.

Nederland broke the U.S. record for rainfall in a tropical storm, measuring 60.58 inches of rainfall. However, reports at the time said Port Arthur may have taken in more than 70 inches, but rain gauges had broken.

“I have people who — as a former city councilman — people who were members of my district that are only just now getting hurricane recovery homes from (Hurricane) Ike,” Beard said. “That was 2008.”

Among several requests by the group of activists include an allotment of funding: