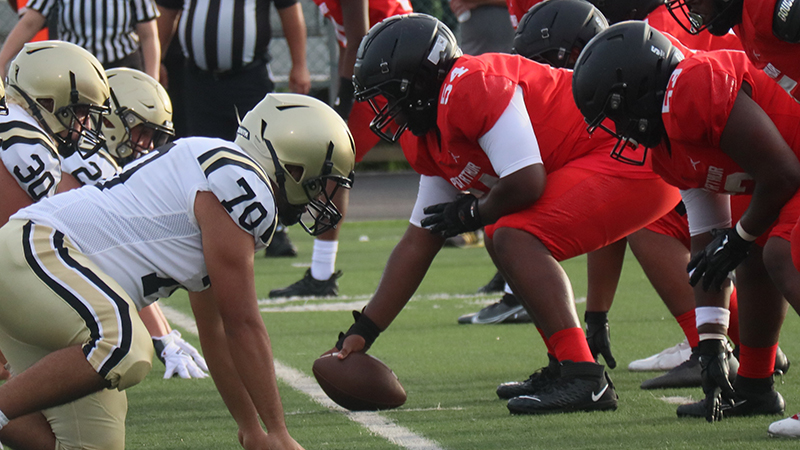 Joshua Marsh prepares to snap the ball during a scrimmage. Chris Moore/The News

While the Memorial football team’s skill positions get the glory and the touchdowns, the success of the Titans offense literally starts with the play of the center.

This year, Joshua Marsh took over the roll that is responsible for putting the ball in play.

“First, you need great snaps,” Head Coach Brian Morgan said. “If you have a guy that is consistently snapping the ball in the same spot every time, it lets (quarterback Jah’mar Sanders) be really relaxed back there. You can tell watching film that Jah’mar is really comfortable by his body language.”

Morgan said that task is not always easy when a player that is more physically gifted is lining up directly in front of the center.

“He gets the most out of his natural talent,” Morgan said. “His brother went through the program and was the center a few years ago.”

Morgan referred to Marsh as a “program guy,” meaning he wasn’t a highly recruited 9th grade player but instead dedicated himself to the team and to getting better.

“He wasn’t physically developed at a young age like some guys are,” Morgan said. “He spent his time in the weight room and got better at practice. To have a good team, you have to have a bunch of those guys in your program.”

Offensive Coordinator Rashard Colquitt said Marsh is the leader of the offensive line.

“He makes all the calls and gets everyone straight,” Colquitt said. “Him being the center and touching he ball every single play, he has to be a communicator, a good leader and he gives that to us.”

Colquitt said Marsh strives to be better than his brother and said coaches use that as motivation.

Colquitt said Marsh can play any spot on the line, which helps him direct other linemen.

“He gets everyone straight, makes the calls on blitzes and communicates it with the offensive linemen,” Colquitt said. “His communication skills are one of his biggest assets.”