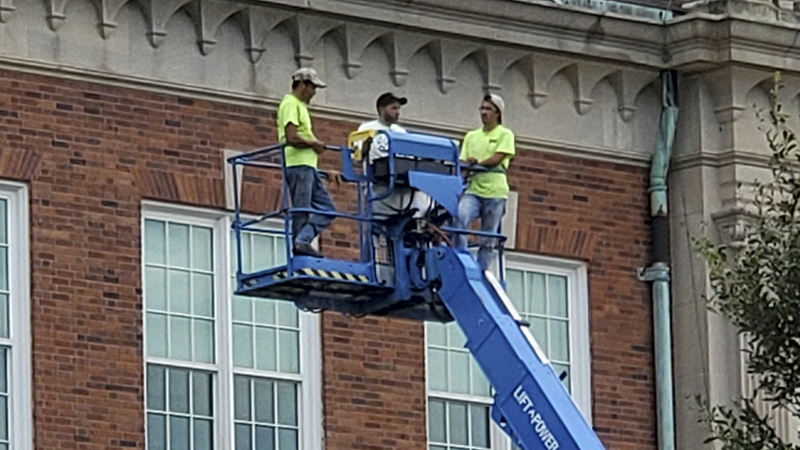 While driving down Procter Street near the college and Gates Memorial Library, throw a glance toward the giant red brick school building near the ship channel.

The school, Woodrow Wilson Early College High School, is getting some needed work to its roof, part of which includes the highly visible cupola.

Kenneth Ordolon, project coordinator for Port Arthur Independent School District, said the project faced some delays due to the pandemic, leading to problems with materials and labor.

But now all the necessary components are here.

Construction Managers of Southeast Texas are the general contractor for the project, which calls for the removal and replacement of the existing roof and cupola with a new, fiberglass variety.

“(The old cupola) had damage to it from Hurricane Laura and other damage. It was showing wear and tear over the years,” Ordolon said. “This (new one) will require very minimal maintenance from this time on.”

The tall, white cupola is 25 feet square at the base that sits on the roof and is a three-tier assembly, Ordolon said, adding it will be assembled on the ground then installed.

Ordolon said the tentative date for a “substantial completion of the work to be performed” has been moved to Oct. 14. Leaders had hoped to have it completed before classes began this school year.

“The building deserves it,” he said of the building that has served generations of students in the city.

This isn’t the only major project in the works for PAISD.

Last year, the district purchased the former Bishop Byrne Catholic High School that was later a Christus St. Mary medical facility for $500,000, plus closing costs. The 80,000 square feet facility, once renovated, will be home to the district’s support services center including the transportation department, janitorial and IT departments.

Ordolon said a local architect would be used in the design of the facility.

Across town, the demolition of the former Stephen F. Austin school is completed and construction documents are being developed for the future PAISD Newcomer’s Center.