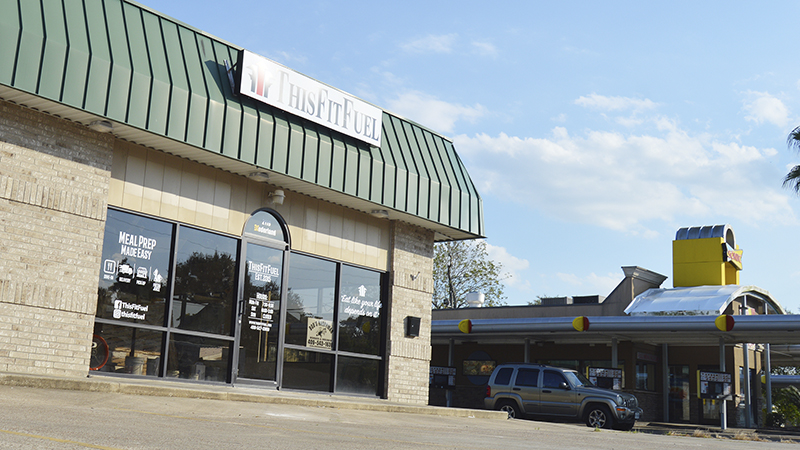 This Fit Fuel is under construction along Nederland Avenue in Nederland, with owners Jason and Amber Dickerson looking to open in late October. (Stephen Hemelt/The News)

NEDERLAND — The Mid County location of This Fit Fuel is set to open in late October under the guidance of Jason and Amber Dickerson.

It’s a journey that’s been years in the making for the couple, who have made a commitment to healthy living through diet and exercise.

Jason Dickerson grew up in Channelview and lived the vast majority of his life in and around Houston, working in the chemical and petrochemical field.

“I took a management job in 2012 and that moved me locally because their office was in Nederland,” Jason said. “I moved here and the story goes, you fall in love and you stay here.”

The connection, now a decade strong, is enhanced by what he sees when Mid County residents support Mid County businesses.

“I absolutely love it,” he said. “They support local businesses 100 percent. I could not have asked for a better community to be involved in and establish a business.”

His path to meal prep supplier and restaurant This Fit Fuel has also been years in the making, starting with Jason’s time in the United States Marine Corps.

Jason joked with Port Arthur Newsmedia, saying like most Marines when leaving active service, he got an office job and soon found himself overweight.

“It took me almost ten years to go, ‘you’ve got the discipline, you got to get back to it,’” Jason recalls. “I started exercising. Once I cut all my weight, I started bodybuilding. Once I moved to the area, my wife said, ‘I think we need to go try CrossFit.’ That was back in 2016. We tried CrossFit out and fell in love with it.”

That’s when Jason and Amber learned and embraced meal prepping, which began as something they did for their household.

Three years into meal prepping and Jason became a CrossFit coach. Then last year he earned his nutrition certificate to become a certified nutrition coach, as well.

“It kept developing into this monstrosity of fitness,” he said. “With my nutrition certificate, I took on a handful of clients because I still had a fulltime job. At the end of the day, they just wanted me to tell them what to eat.”

Unfortunately, Jason and his wife were let go from their petrochemicals positions in the last year.

“I had been thinking about (getting into this business) prior to being released from my previous job,” he said. “I just never had that faith of dropping my job and starting this. I honestly believe that God gave me a little push and made things happen for me and my wife to open this business.”

Jason is friends with the owner of This Fit Fuel in Beaumont and asked about franchising options.

A deal was struck, and a location is now under construction on Nederland Avenue with a plan to open is less than two months.

To learn more about the business, visit thisfitfuel.com or facebook.com/thisfitfuel or call 409-273-0607.