Here’s how you can help minimize flooding in your neighborhood 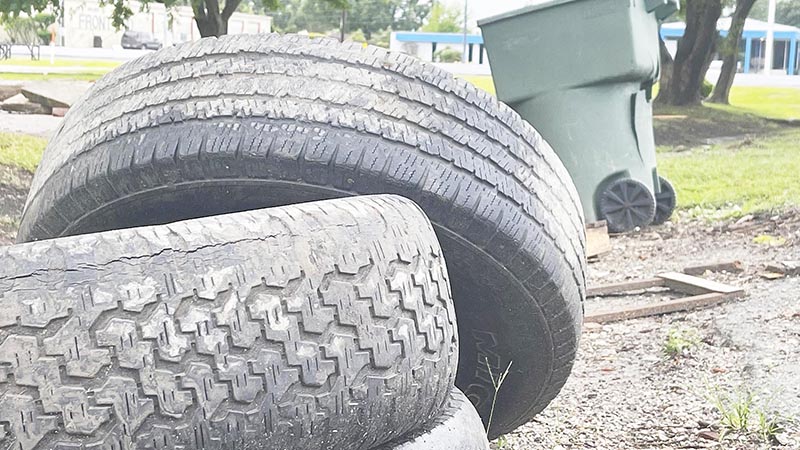 Debris lays on the side of the road near a house on 23rd Street in Port Arthur. (Monique Batson/The News)

City officials are asking Port Arthur residents to be mindful of what’s in their yards, as heavy rains expected to fall across the region this week could sweep debris into ditches, increasing the chances of localized flooding.

“Make sure drains are clean,” said City Manager Ron Burton. “If you cut grass, make sure it’s bagged and put away. Bring in toters (transh cans). They float all over the city. Don’t leave them on sidewalks. All of these things enhance the flooding in the city.”

A storm surge watch has been issued for Sabine Pass, Port Arthur, Nederland and Beaumont; meaning 2-4 feet of water could land in the affected areas somewhere Tuesday morning and Wednesday evening, according to information from the National Weather Service.

“For years since I’ve been in politics — over 25 years — we’ve always prepared for a tidal surge,” said Jefferson County Commissioner Michael Sinegal. “But I’ve seen more devastation from Harvey than Rita and Ike. I never dreamed I would be able to go from 39th Street to Thomas Boulevard in a motorboat. I’ve never seen that much water and I’ve seen a lot of floods.”

The 2017 weather event dropped 60.58 inches of rain in Nederland, breaking the U.S. record for the most rainfall during a tropical event. Groves saw 60.54 inches. There were reports that Port Arthur could have experienced 70 inches or more, but that rain gauges broke.

But it’s the Harvey mentality that leaders are currently trying to avoid.

“What we do not want to do at this point is create a level of stress that is unnecessary,” Burton said. “We’re working very closely with the National Weather Service and making sure to put up information as soon as we get it, and try to avoid unnecessary Harvey anxiety in the community.”

Burton said the city is working in tandem with county and other agencies, including Drainage District 7 regarding fuel for the pumps, to prepare for what could become Hurricane Nicholas by the time it makes landfall sometime late Monday, however heavy rain is expected through mid-week.