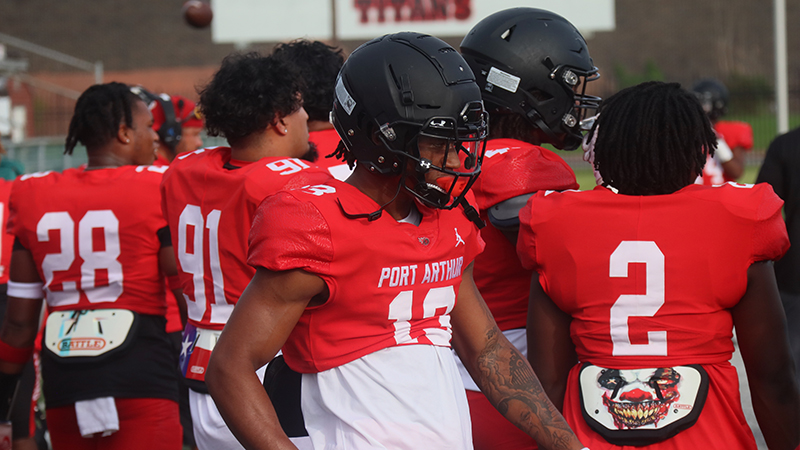 CROSBY – The one-two punch of Crosby’s Cyrin Myles and Quincy Jones was too much for Memorial to overcome as the Cougars handed the Titans their first loss of the season, 41-26, in non-district football action Friday night at Cougar Stadium.

Jah’mar Sanders and Ilijah Williams tried to keep the Titans in the game.

“We had a couple of guys out tonight, so we knew it was going to be tough to run against them,” said Memorial Coach Brian Morgan. “Because we couldn’t get the run game established, it made us throw the ball a lot more than we wanted to. We were able to make some big plays to stay in the game.”

Crosby (1-2) broke a 20-20 tie to take its first lead of the game on its second possession of the third quarter. Brandon Womack’s 56-yard punt return set up the Cougars with first and goal at the Memorial 10. Quincy Jones had consecutive runs of 6 and 4 yards, the last of which went for a touchdown to put the Cougars up 27-20.

After forcing a Memorial punt, Crosby put together another scoring drive. Myles hit Womack for a 31-yard completion. Then Myles hit Kameron Kirkwood for 15 yards. Kirkwood caught a quick out and bullied his way into the end zone for a 19-yard touchdown to extend the Cougars’ lead to 34-20 with :21 left in the third quarter.

Memorial (2-1) responded with its first scoring drive on the second half. Sanders hit Adrian Hayward on a swing pass for 13 yards to get the drive started. Another swing pass to Hayward went for 18 yards to the Crosby 8-year-line. Sanders took it in himself on an 8-yard touchdown run. The extra point was blocked to make the score 34-26 with 11:12 left in the fourth quarter.

The Titans defense was unable to stop the Cougars on their next possession. Myles completed two straight swing passes to Jones for 13 and 11 yards, respectively. Jones capped the drive with a 27-yard scoring run, his third of the game, to push the lead to 41-26 with 6:43 left in the game.

“I knew this was going to be a tough game,” said Morgan. “Crosby was a state finalist last season, and they have another good team this year. We wanted to play tough teams in non-district to get us ready for district play. We just have to use the bye week to clean some things up in all three phases of the game, and most importantly, get healthy.”

The game started in grand fashion as Jaylon Guilbeau returned the opening kickoff 96 yards for a touchdown. The extra point was blocked to make the score 6-0 Titans.

Neither team was able to gain much traction on offense on their next two possessions. Finally, the Titans broke through with another lengthy scoring play. On third-and-four, Sanders hit Williams on a 56-yard catch and run to extend Memorial’s lead to 13-0 with 6:39 left in the first quarter.

Crosby was able to answer back on its ensuing possession. The 10-play drive featured all running plays from Myles and Jones. Myles had a 28-yard run on third-and-23 to keep the drive going. He scored a few plays later on a 3-yard run to cut the Titans lead to 13-7.

Marcus Hayes started Memorial’s next drive with a 10-yard run. But the drive stalled after that, and the Titans were forced to punt from their own 36. A low snap led to a punt that spun back and travelled just three yards, which set up Crosby with great field position at the Titans’ 39.

The Cougars did not waste the good fortune as they took just three plays to score. Myles hit Jones out of the backfield for 16 yards. Myles carried for 11 yards and Jones scored on a 12-yard burst up the middle. The extra point was blocked to leave the scored tied at 13-13 with 11:04 remaining in the second quarter.

Memorial reclaimed the lead on a seven-play drive. Sanders hit Adrian Hayward on a 28-yard screen pass to put the ball at its own 47. Sanders connected with Ilijah Williams for 10 yards on third and 10 to keep the drive alive. Williams should have been stopped short of the first down but made two Cougars miss and fought for the necessary yards for the first down.

After Sanders rushed for six yards, he connected with Williams once again. This time the scoring play covered 37 yards. Again, Williams was able to elude several would-be tacklers to find the end zone to put the Titans back on top at 20-13 with 1:24 left in the quarter.

The Cougars, once again, were able to answer right back. Aided by a Titans’ personal foul penalty on the kickoff return, Crosby needed just six plays to score. Myles hit Kameron Kirkwood for 10 yards. Myles rushed for 12 yards to the Memorial 15. Myles hit Kirkwood on a slant for a 15-yard scoring play to tie the game at 20-20 with :21 before halftime.

And The Game Ball Goes To…

Crosby’s Brandon Womack returned a punt 56 yards to the Memorial 10 early in the third quarter. The Cougars scored two plays later to take the lead for good at 27-20.