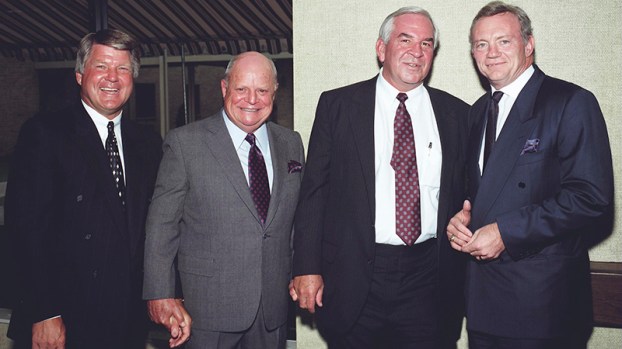 Jimmy Johnson, left, Don Rickles, Walter Umphrey and Jerry Jones are pictured at the Walter Umphrey Roast in Port Arthur. (Courtesy of the Museum of the Gulf Coast)

It was clear within moments of his Tuesday death that Walter Umphrey was well loved in and beyond Southeast Texas. Immediately city and county leaders, legislators and community members began sharing tales of Umphrey’s legacy.

Port Arthur Newsmedia spoke with a few of these people who told of the impact the late legislator and philanthropist had on their lives, as well as the Port Arthur community as a whole.

I knew his mother, who he was very close to. I met her when my mother would shop downtown. He was a friend of my family. When he was a junior (at Thomas Jefferson High School in Port Arthur), he was a left tackle and my brother was a right guard. He was an excellent football player and got a scholarship to Southern Methodist University.

His sophomore year he went up to Baylor and, of course, that’s where he got his law degree. His wife Sheila and I graduated from high school together. I had known her since junior high. He never forgot the people that he grew up with. He was lifelong friends with a lot of people in Port Arthur.

We were on-again, off-again. I offered Walter a job, which he turned down early on in his career. I was representing all the labor unions early in my career, and they ended up with Walter. And Walter used to laugh and say the way he did it was to tell everyone I was a good lawyer but too busy in Austin to represent them.

There was a period of time when the district attorney was picking on me, and Walter and I got together and became better friends. I helped him get appointed to the Parks and Wildlife Commission, and after that we were bosom buddies. He was helpful to me in many ways. Lawyers take a beating generally by a lot of folks, but if you look around — particularly in Jefferson County — lawyers have probably done more for Jefferson County than any other profession you can think of.

There are schools and facilities all over the area that wouldn’t be there if not for a lot of lawyers. He was a good man and I’d like to be as well-remembered when I pass on as he is today because he deserves it.

I think everyone knew Walter. He had good friends that were friends of mine, and that’s how we were introduced – this was the late 70s or 80s. In 1998 The Port Arthur News roasted Jimmy Johnson. Walter was a big supporter of these roasts — Jimmy Johnson, Bum Phillips, Billy Tubbs. It started as a sports event but Walter had been such a big supporter and such a bigger-than-life figure. His roast was May 1991 — the fourth one.

He reluctantly accepted. At the time Walter was the No. 1 whale at a casino in Vegas. He wasn’t a sports guy so it was difficult to get big names to come roast him. He was big at the Mirage and one of their acts was Don Rickles. So he called the Mirage and asked, and they flew him in on their corporate jet. (Rickles) was one of Johnny Carson’s regular guys. Ann Richards was governor and we had them as back-to-back roasters. Jerry Jones from the Cowboys was one of the roasters. We had 13 of these roasts and Walter was the biggest supporter we had.

We raised over $700,000 for the Museum of the Gulf Coast through the roasts. He liked the cause. Walter supported everything; he did so much people didn’t even know about. His relationship with Ann Richards helped get her to agree to be the roastee the next year. One of her roasters was Bill Clinton. He was running for president and wanted her to endorse him. She agreed if he came, and made that announcement in Umphrey’s hanger at the Jefferson County airport. Everyone that follows a president was in Port Arthur that night.