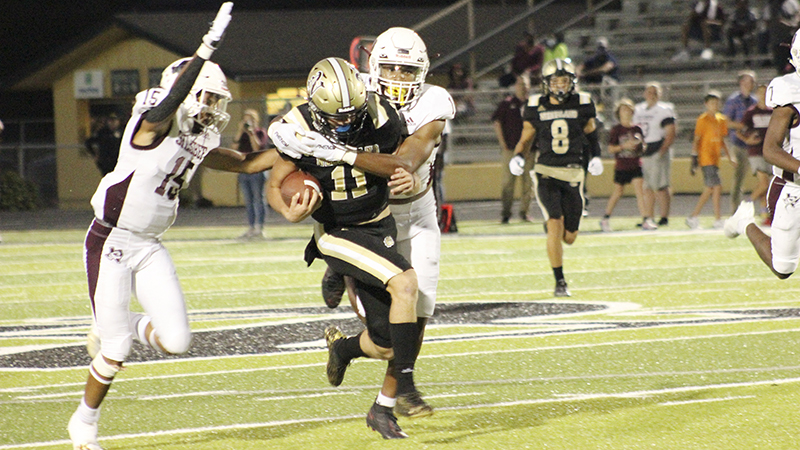 Nederland's Luke Broussard runs the ball during the Bulldogs' overtime win against Silsbee. (Jackie Batson/Special to The News)

NEDERLAND — Despite being down 34-13 in the fourth quarter, the Bulldogs forced overtime and ultimately defeated the Silsbee Tigers 41-34 at Bulldog Stadium Friday.

The Bulldogs scored 21 unanswered points in the fourth quarter to force the extra play.

In overtime, Kyndon Fuselier ran in a short run and tacked on the extra point to give the Bulldogs the deciding score. Nolan White came up with an interception in the end zone to end the game.

A combination of penalties and turnovers doomed Nederland early as well as elite play from Tigers.

Silsbee jumped out to a quick lead after the Tigers capped a seven-play drive with a 1-yard touchdown run to take a 6-0 lead. Silsbee failed to convert the two-point conversion.

Nederland tried to answer by starting off the game with a long run by quarterback Luke Broussard. The run put the ball deep into Tigers territory, but the drive stalled and Broussard threw a pick on fourth down near the end zone.

The Tigers wasted little time extending their lead, connecting on a 45-yard pass from Mason Brisbane to Dre’lon Miller to give Silsbee a 12-0 lead after failing to convert another two-point conversion.

Broussard threw his second interception on the ensuing drive after the ball was tipped in the air.

The Bulldogs pulled out a goal-line stand and the offense rewarded them when Dominic Stimson took a screen pass 34 yards to the end zone, which brought the score to 7-12 in favor of the Tigers.

The Nederland defense capped off the first half with a second goal-line stand to keep within one score going into halftime.

The second half didn’t start off well for the black and gold. After five consecutive runs, Broussard aired out a pass down the right sideline, but a Silsbee defender outmuscled Noah Kendrick for the jump ball. The Tigers scored two plays later on a 62-yard pass from Brisbane to Miller, who caught the ball short and outran the Bulldogs defense. Miller finished the game with eight catches for 239 yards and three touchdowns.

Both teams traded the ball before the Bulldogs were able to get some offense going. Nederland running back Mason Beresford found some room up the middle for a 25-yard scamper to bring the score to 19-13 with the Tigers in the lead late in the third quarter.

The Nederland defense shot themselves in the paws on the next drive with multiple penalties bailing out the Tigers’ offense before running back Marquis Dodd punched it in from 4 yards out to give Silsbee a 27-13 lead with 10:27 left in the game.

Brisbane would find Dodd one more time on a 67-yard TD connection in the fourth quarter to make the score 34-13.

The Bulldogs added a late score with a 6-yard run by Broussard to start the comeback. After a stop and score by the Bulldogs, Nederland recovered an onside kick with just under four minutes left to play and down eight points, setting up the tying score.

The entire Nederland team for pulling off one of the better comebacks of the young season.

Down eight points with just under four minutes left to play, Nederland recovered an onside kick to get the ball back with a chance to tie. A Silsbee defender could not handle the kick and the football ultimately wound up in the Bulldogs’ hands.

Nederland has the week off before starting district play against Port Neches-Groves.