PNG loses in battle of unbeaten teams in Tomball 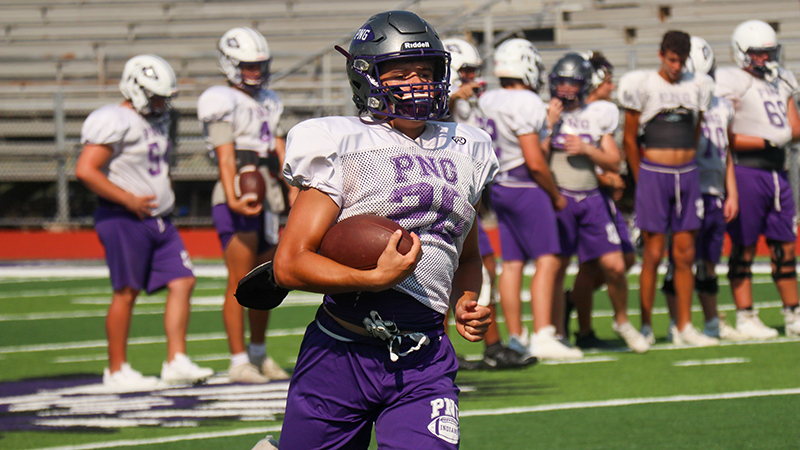 The Port Neches-Groves Indians got a look at Tomball’s impressive new $46 million stadium as well as the school’s equally impressive offense on Friday night, as the Cougars, a Class 6A team, defeated the visiting Indians 42-25 in a battle of unbeaten squads.

PNG (2-1) took an early 6-0 lead, driving 75 yards on the game’s opening possession; but that was the only lead the Indians would have on the night, as the Cougars (3-0) responded quickly on the ensuing possession and never looked back.

PNG had trouble containing Tomball quarterback Cale Hellums, who threw for three touchdowns and ran for two more. It was Hellums’ 58-yard TD run, just 2:38 after PNG’s opening score, that proved to be a momentum shifter.

Hellums had 11 carries for 161 yards for the game.

PNG quarterback Cole Crippen threw for 167 yards and three touchdowns, with Landon Guarnere as the recipient of each of the scoring aerials. Koby Trahan had 69 rushing yards and one touchdown for the Indians.

PNG trailed 21-6 at halftime and 28-6 just 45 seconds into the third quarter, but the Indians refused to go quietly.

PNG cut the Tomball lead to 35-25 just three minutes into the fourth quarter.

The Indians failed to recover the onside kick, allowing the Cougars to seal the win when Hellums connected with Jayden Grey on a 25-yard TD pass with 4:41 remaining.

And The Game Ball Goes To…

For PNG, wide receiver Landon Guarnere and quarterback Cole Crippen, who teamed up for three TD passes, share the game ball. For Tomball it’s QB Cale Hellums, who threw for 149 yards and three touchdowns to go with 161 rushing yards and two TDs.

The Play Of The Game…

Hellums’ 58-yard touchdown run on third and long that gave Tomball a 7-6 lead. It looked like PNG was going to force Tomball to punt, but Hellums’ scamper proved to be a backbreaker and the turning point.

PNG had 259 total yards for the evening, while Tomball had 257 yards on the ground alone. The Cougars had another 149 yards through the air for 406 yards of total offense.

Tomball is at Oak Ridge for a non-district game at 7 p.m. Thursday.