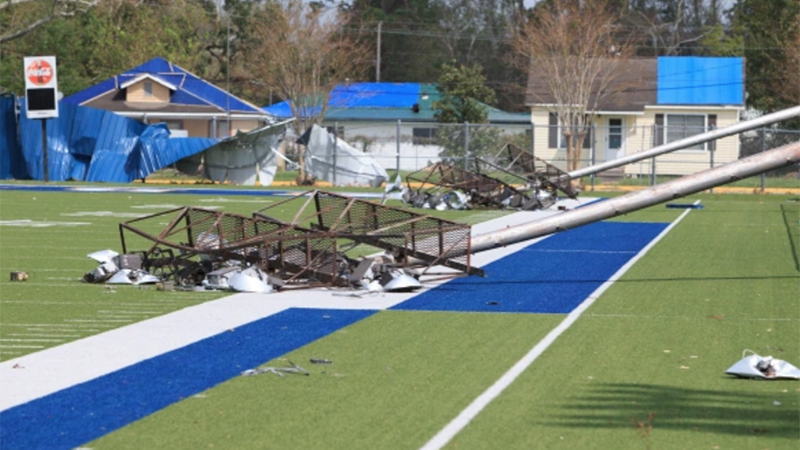 Stadium lights were taken down by the high winds of Hurricane Laura on Aug. 27, 2020. (Kirke Meche / American Press Archives)

All hurricane recovery construction projects within the Calcasieu Parish School Board have been temporarily halted. The lack of FEMA reimbursement is the cause of the halt, said Holly Holland, spokeswoman for the district.

“Our school system does not have cash available to continue the projects at this time,” she said.

Hurricanes Laura and Delta wreaked an estimated $400 million worth of damages on the district’s properties, but to date, only $116,000 have been received from FEMA to cover the repairs. CPSB has used its own funds to begin recovery, but has exhausted its funds as follows: $40 million from insurance, $100 million in borrowed funds and $20 million in local dollars.

Besides spending its own funds, the district has also carefully followed the directions of FEMA for a reimbursement totaling nearly $300 million.

“Like many of you, we are incredibly frustrated with the process,” Holland said. “As many of you understand, due to dealing with your own home repairs, the construction and fund reimbursement process is cumbersome and tedious. We have followed every direction provided to us in hopes of avoiding the current situation.”

Of the $400 million worth of repairs, CPSB has submitted worksheets to FEMA totaling about $137 million for remediation and temporary repairs. Additionally, the district submitted an estimated $248.6 million of permanent repairs for 128 projects.

To date, 31 projects have been completed, Holland said, though no complete reimbursements have been made.

To expedite the reimbursement process with FEMA, CPSB staff members have attempted to work closely with state and federal leaders, “but as of now we have not been successful,” Holland said.

She said these attempts include weekly calls with FEMA and Louisiana Public Assistance representatives, conversations with local congressmen, senators and state legislators, an in-person meeting with FEMA Director Deanne Criswell, multiple meetings with Gov. John Bel Edwards and Zoom calls with FEMA and the Governor’s Office of Homeland Security and Emergency Preparedness.

After such failed attempts, Holland said the district’s current position was “simply unavoidable.”

“If we had received some sort of FEMA reimbursement by this point, whether we received large lump sums or smaller increments, we feel that this suspension would not have happened,” she said. “FEMA representatives do not advocate for entities allowing buildings to sit and deteriorate further. The entire FEMA process is based on reimbursing applicants for money spent, but without incremental payments, the process becomes nearly impossible.”

As per contract, contractors and architects will remain with their assigned projects until the suspension is lifted. The public is invited to contact their national elected officials to help aid CPSB’s recovery process.