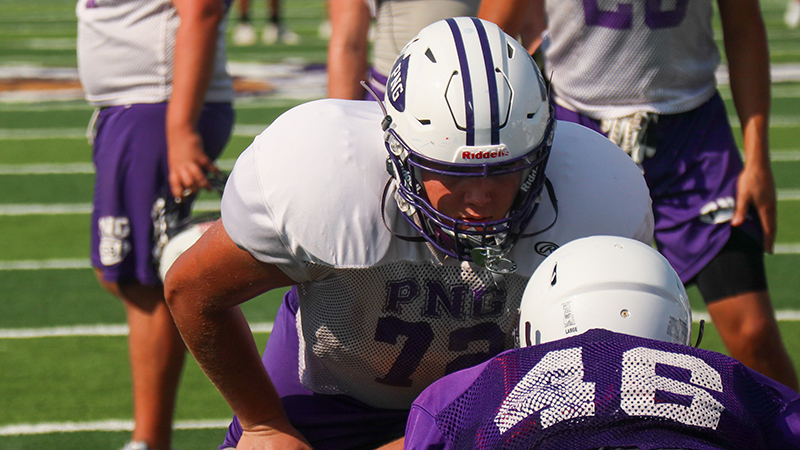 The junior uses his intimidating size and unique athleticism to give opposing defenders second thoughts before trying to get past him.

During practice, PNG Head Coach Brandon Faircloth called a play that required Ware to pull and be a lead blocker for the runner. Ware turned the corner and made the correct read on the block, drawing praise from Faircloth.

“He is an incredible lineman,” the coach said. “He is physical. He is aggressive. He can run block and he can get out in space. Any play, he is able to do it.” 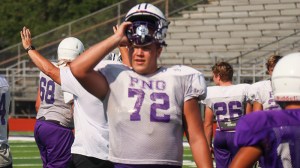 The right tackle said he has a ritual to get himself in the right frame of mind for games. He takes time to pray and listens to music. Ware said Kanye West’s new album Donda is currently the favorite in his rotation.

Ware said he is not as fast as he once was, but still has some speed. He ran the 100m dash in middle school and can clock a 4.8 40-yard dash now.

“I used to be one of the speed guys,” he said laughing. “That used to be me, but not anymore.”

Ware and quarterback Cole Crippen have been friends since elementary school. However, Ware went from playing running back, quarterback and tight end to protecting them.

“He is a great leader,” Crippen said. “He works hard every day. I definitely feel safe with him over there… It is hard to function if you don’t have time to pass. It is great to have him and all of the guys up front.”

Ware said his greatest feat of strength in the weight room is his 275-lbs power clean.

He added his greatest team strength comes from the cohesiveness of the entire line.

“We have a great connection,” he said. “It is the best I have ever seen. We are all friends. We hang out outside of school and inside of school. It is great.”

The offensive lineman started varsity last year as a sophomore. The team had a down year by their standards and lost in the first round of the playoffs in a close game to Fort Bend Marshall.

That has not dampened Ware’s expectations for this season. He said he still wants a state title and wants to dominate everyone that lines up against him this season.