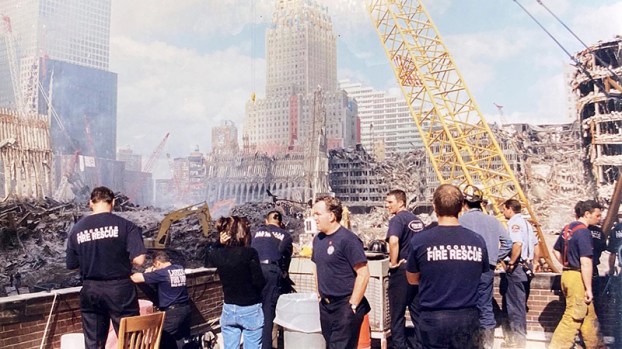 Firefighters from across the nation world arrive to help at Ground Zero. (Courtesy photo). 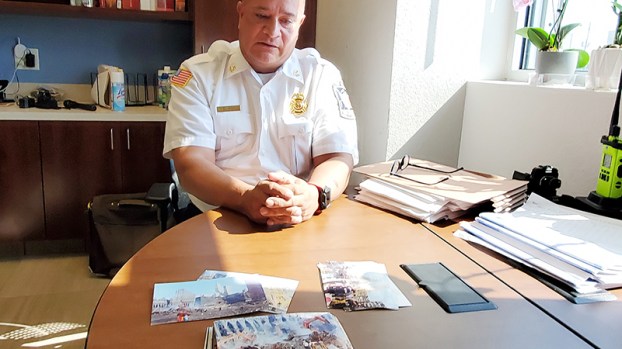 Port Neches Fire Chief Eloy Vega talks of traveling to New York to assist and bring donations after Sept. 11, 2001 acts of terror. Piles of photographs in front of him show the devastation. (Mary Meaux/The News) 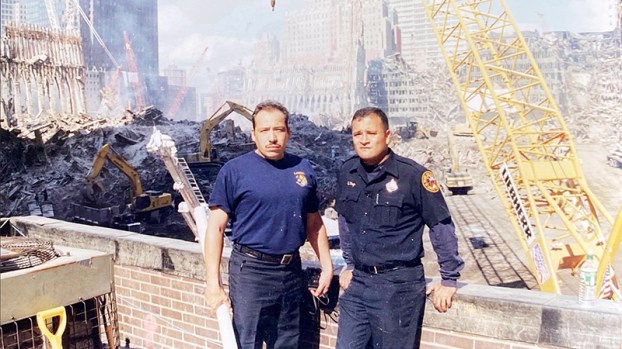 Eloy Vega, right, when he was with the Laredo Fire Department and Firefighter Villareal on the scene two weeks after the attacks. 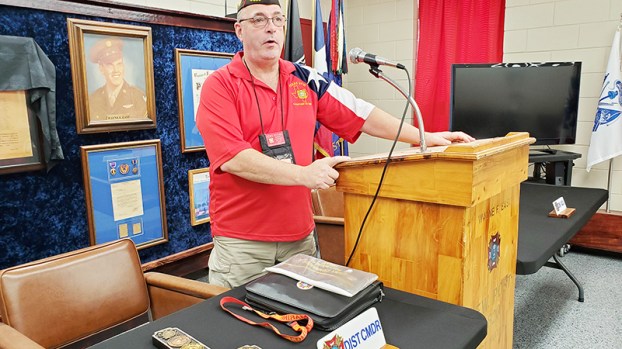 VFW Post 4820 Port Neches Commander Jorg Kitchen speaks about the effect of the anniversary of Sept. 11, 2001, on veterans and the impact of the withdrawal of troops in Afghanistan. (Mary Meaux/The News) 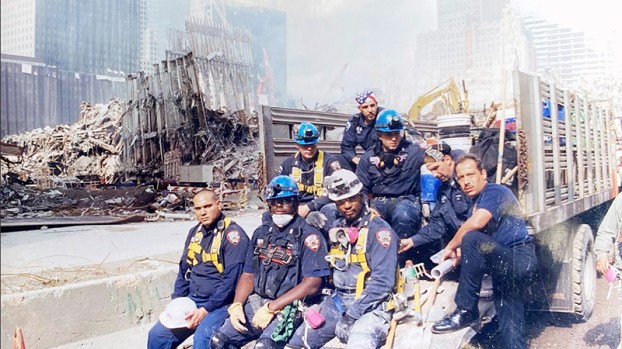 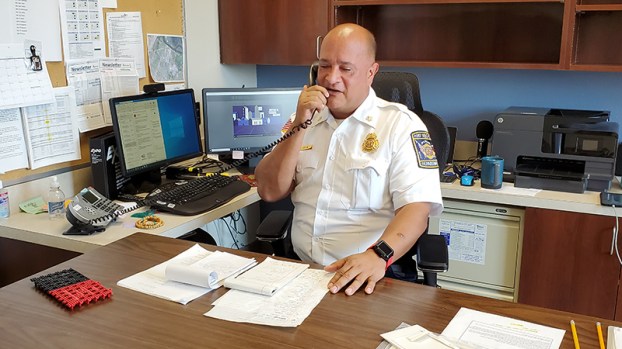 Port Neches Fire Chief Eloy Vega takes a phone call in his office. His department will perform a stair climb in honor of the firefighters who “fearlessly charged into the Twin Towers on 9/11.” (Mary Meaux/The News) 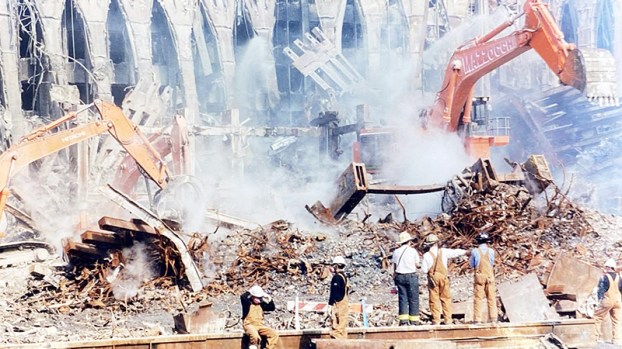 PORT NECHES — Two local groups are set to commemorate 9/11 on Saturday, the 20th anniversary of the acts of terror on our nation.

The Port Neches Fire Department will perform its first ever stair climb in the training tower beginning at 8:30 a.m.

The climb represents the FDNY firefighters who “fearlessly charged into the Twin Towers on 9/11. Once completed, the distance traveled inside the training tower will be equivalent to the distance and height the FDNY members had to walk inside the towers to begin fire and rescue operations,” Chief Eloy Vega said.

The climb will be performed by firefighters only, though the community is invited to honor those lost 20 years ago at the station, 606 Magnolia Ave.

In addition, the Port Neches Veterans of Foreign Wars Post 4820 is hosting a blood drive and link sale and holding a service from 8 a.m. to 3 p.m. at First Baptist Church of Nederland, 1911 Nederland Ave., Nederland.

Two weeks after the attack on the nation, Vega, who was with the Laredo Fire Department, along with Firefighter Lopez and Firefighter Villareal traveled to New York to offer aid and bring donations.

“It seemed like a different planet, like you’re immersed in, I guess, a movie, where it’s chaos and devastation,” he said while describing the scene at Ground Zero.

“Like an end-of-the-world type apocalyptic scenario where one minute you’re watching it on television and in the next you’re immersed in that. We always thought, oh, it’s cinematography, it’s a movie, but no this (scene in New York) was real, this was real and it was hard to grasp that it was real.”

Vega said it was even harder to grasp at that time that there would be recovery and things would go back to “normal.”

“But how? How is that going to happen? This is beyond catastrophic,” he said. “But slowly, surely, not only did it start to clear out and start to become normal, so did the city and so did our nation.”

Vega, who assumed leadership in Port Neches earlier this year, said the firefighters at his station are motivated and passionate about taking part in the stair climb.

The math has been worked out. While the training tower is far short of the 110 stories in the World Trade Center, the local firefighters will perform an estimated 30 trips up and down the tower to be equivalent.

And they will do it while wearing full gear, which comes in at 40 to 50 pounds, he said.

What is interesting, he said, is many of the members were in school when the towers fell.

“They said this happened when I was in elementary, or middle school or high school and it motivated me to serve my country in either the fire service or the military,” he said. “It makes me extremely proud of these individuals and inspires me to improve and be the best firefighter I can be.”

VFW Post 4820 Port Neches Commander Jorg Kitchen, who is also District 2 commander, said he has coordinated efforts with Nederland Fire Department for a large American flag to be displayed over Nederland Avenue on Saturday.

The link sale is a way to fund raise with the money being split between the VFW and Circle of Hope, a non-profit that assists those in need for catastrophic events.

The event will also memorialize the 13 service members who lost their lives when the government withdrew troops from Afghanistan.

For some, the passing of time has led to the memory of the acts of terror to fade – until recently. Then there is a trigger and the memories come flooding back.

Kitchen said the reopening of wounds has led to an uptick in PTSD and the number of veterans committing suicide has increased.

“And we’re having a lot of calls from vets, Afghanistan, Iraq. Of course they’re angry. They have a right to be, but that has stirred up a lot of the emotions,” he said.

So the emotions that were tamped down are now brought to the surface, 20 years worth.

Kitchen said the VFW post is working on its vision — veterans putting unity back in community and are working on a number of other community events.