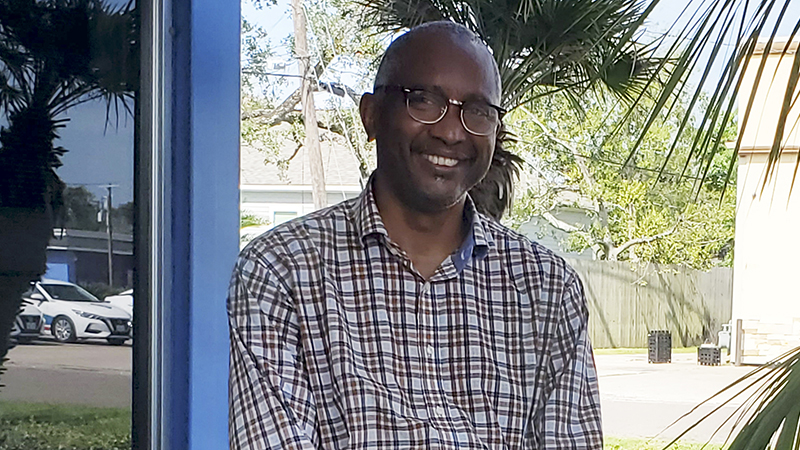 From before his first sermon at the age of 18, Harry Abrams Jr. has strived to help others.

The Port Arthur man who has master’s degrees in Counseling and Theology and is working toward two doctorates gathered years of his writings and put them in book form — “Transformed Thinking, Helping Improve Behavior in Society.”

Years ago the Rev. Abrams approached a former Port Arthur News editor asking if he could write something positive to run in the paper, and was met with agreement.

Abrams saved his work through the years, he said, adding it was his pastor, the Rev. Richard Keaton Nash’s idea that motivated him to put the work into book form.

Nash, pastor of Solid Rock Missionary Baptist Church, said the book is designed to help people apply Biblical principles to everyday life, improve decision making ability and be a tool to help the individual reader have a quality, productive and happy life.

Abrams said in transformed thinking the idea is to model the behavior of Jesus and other behaviors of Biblical characters.

“Once we get to thinking of those behaviors, then we’re going to be able to feel different and hopefully we will change our behaviors based upon those behaviors in the Bible,” Abrams said.

And while Jesus did no wrong, the reverend said, other characters in the Bible did.

The reader can look at that particular character and think, “I don’t want to do this,” seeing himself in that character’s behavior.

“I can extrapolate that, I can see myself in that character right there so maybe I don’t want to do that and I want to focus on doing the opposite of what he or she did and as a result I will become a better person,” he said. “By me becoming a better person then I am indeed improving behavior in society.”

The last thing someone wants to hear is they need to change.

“You never want to tell a person they need to change, never. You want to look at yourself and see where you can change and in essence, when you change you’re really changing the way people behave with you,” he said. “By you changing your behavior, you’re helping improve society. But if you want to start a fire you go around and start telling people ‘you need to stop doing this and doing that.’ You may be right, don’t get me wrong, you might be right in what you’re saying, but your approach is wrong.”

In his preaching’s Abrams studied the Biblical languages of Hebrew and Greek, studying the meaning and double checking to make sure the information is credible to the reader, he said.

The book, he said is “written with the intention of building a foundation to think upon. The intentions of this book is to improve behavior in society by focusing your thoughts on the behaviors of Jesus Christ and other Bible characters and begin applying those behaviors in our everyday lives. When this is done, our communities, cities, states, nation and world will be transformed. It begins in the mind.”

You can purchase the book on Amazon, Barnes & Nobles or Apple iBooks.