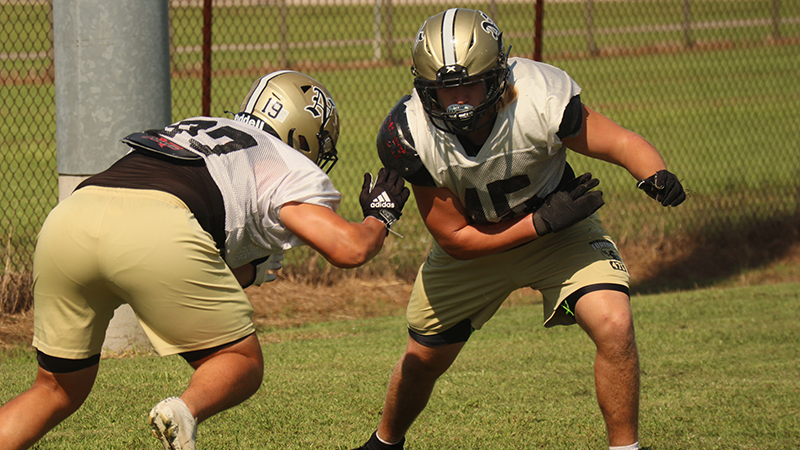 NEDERLAND — Nederland defensive end Jacob Kotz has been a destructive force on the Bulldogs’ defensive line this season.

The defense held the Mustangs to 1 yard of total offense after numerous botched snaps made it difficult to muster any offense.

While he is slightly undersized for his position, Kotz uses speed, technique and determination to wreak havoc.

“I don’t know if he is the prototype body type for a defensive lineman,” Barrow said. “He is probably our No. 1 backup on any position on the offensive line. He worked in the offseason at tight end/fullback. He doesn’t do a lot with his mouth, but he does a lot with the rest of his body.”

Kotz lets his opponents do the talking for the most part. His hair draws the most compliments and critiques during the game, he said. Kotz has been growing out his blonde mullet for more than a year. Last season, his hair just crept out from under his helmet. This season, the defensive end is easily recognizable with the locks flowing over the top back of his jersey.

“People always ask about it in the middle of the game,” he said. “Somebody once said, ‘Nice hair, Goldilocks.’ That was when we were winning big though, so it didn’t matter.” 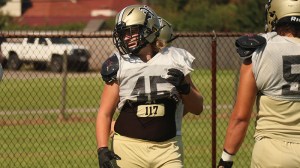 “If you take a play off, next thing you know, it is a touchdown and they are up,” he said. “I have to bring it every play.”

Being smaller, Kotz said he has worked relentlessly on getting off the ball quickly and using his hands to get by would-be blockers.

“Ever since last year’s season ended, I have been working on getting better,” he said. “It is all practice and repetition. I have just been in the weight room, too.”

Kotz said he is most proud of hitting the 400-lb mark in his squats.

“I have been working on getting that since my sophomore year,” he said. “I was hype. It felt good.”

Barrow said Kotz’s attitude separates him from other players.

“He doesn’t talk it. He brings it and he does it every day,” Barrow said. “He is one of those guys that coaches like to be around. It is good for the team to see his work ethic and how he approaches things on and off the field. Just a great guy to have on your team.”

Kotz and the rest of the Bulldogs will host Silsbee Friday as Nederland looks to improve to 2-0 on the season.