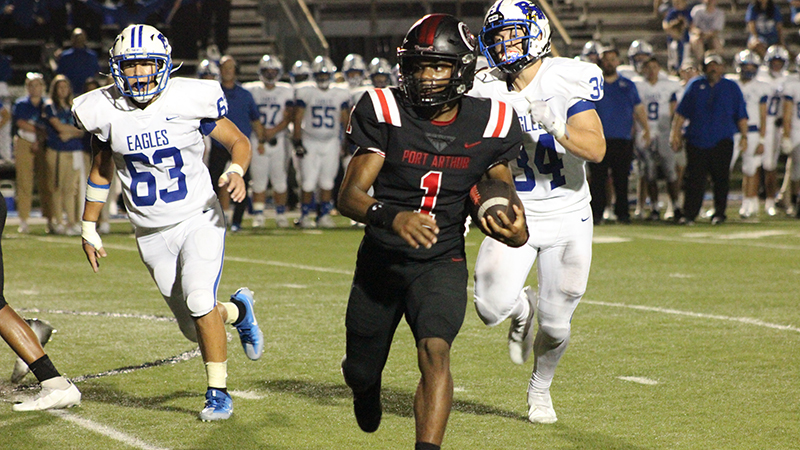 Jah'mar Sanders takes off during the Titans' 56-28 win over Barbers Hill. (Jackie Batson/Special to The News)

Last week, Memorial quarterback Jah’mar Sanders put up one of the all-time great performances I have seen from a local player.

In a 56-28 win over Barbers Hill, Sanders accounted for more than 600 yards of offense and six total touchdowns.

This is coming off a Week 1 performance against Lancaster, where the senior racked up more than 340 yards and four touchdowns.

Anyone who was hoping the Titans quarterback would fall down to earth after his district MVP season last year seems to be in for heartbreak as it appears Sanders has improved.

It does not make sense that he does not have more offers to play college football. The stats speak for themselves. Anyone who has watched him play knows he deserves to play at the next level. By all accounts, he is the perfect teammate.

Memorial head coach Brian Morgan tipped me off to something last year when talking about the way Sanders leads the team. He said anytime the quarterback turns the ball over, which is rare, the defensive players are the first ones to pick him up and pat him on the helmet.

They are the first ones to tell him they will get him the ball back, and they usually do.

Last season, there were a few plays where Sanders was hit out of bounds late and the bench jumped up to protect him. On social media, his teammates do the talking for him by posting his highlights and singing his praises.

There is no doubt who leads the team.

Morgan has said there are better passers on the team, but no one who can make plays like Sanders.

During conversations with Morgan, Sanders has expressed interest in lining up at receiver to allow some of the other guys to throw, but Morgan expressed to him that if he lines up at receiver, there is a chance he will get the ball. If he stays at quarterback, he will touch the ball every play.

It is possible that colleges are shying away from Sanders due to his height. At 5-feet-9, he would be on the shorter side for a quarterback, but that does not excuse the lack of attention. The character and playmaking ability is enough of a reason to have him on a roster.

Sanders and Fuselier join a host of other players on their respective teams, along with players from Port Neches-Groves that seem to get overlooked.

Last week’s performance by Sanders is sure to get more colleges’ attentions. Hopefully, all eyes will be on the area now.