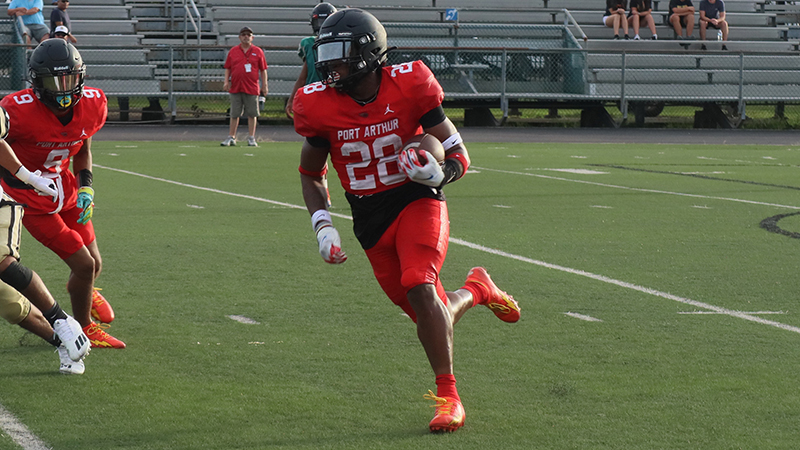 Memorial running back Adrain Hayward runs the ball during a scrimmage against Nederland. Chris Moore/The News

The Memorial Titans are trying to keep a level head after a 27-7 victory in Week 1 against Lancaster. The Tigers were ranked No. 16 in the state headed into the contest, with the Titans trailing two spots behind them.

“Obviously, it is good to win,” Memorial Head Coach Brian Morgan said. “The kids played really, really hard and didn’t get caught up in the mess and back and forth between the teams. They executed pretty good. There is still a lot of stuff that we have to improve on to be where we want to be.”

On Monday, Morgan had a direct message for his underclassmen.

“The senior class has played a lot of football and will keep a lot in check,” Morgan said. “For us, the young guys have to know they haven’t arrived. That has been the message to them. You haven’t arrived. The seniors have big expectations. While it was a big win, we texted back and forth over the weekend and they are all moving on. It is a good win, but we want to be better than that.”

This week, the Titans host their first home game of the season as Barbers Hill travels to Memorial Stadium.

Last year, the two teams squared off and the Titans pulled out a 27-23 win over the Eagles.

Morgan is anxious to see how his defensive line matches up against the Eagles.

“We always try to schedule at least one opponent that has a big offensive line because that is what you are going to see in the playoffs,” he said. “That is why we like to play them. We might not see that kind of size in district play. They have a new coach that has changed some scheme stuff, but they play really hard. They will run around and play for four quarters.”

“The quarterback is certainly a special player,” Abseck said. “Their offensive success kind of begins and ends with him as the tone setter. I would like see that matchup and how we can contain him and limit his big plays. I think a big key to helping us is minimizing his big plays.”

Sanders accounted for four touchdowns (three rushing and one passing) against Lancaster.

Abseck also said Memorial running back Adrain Hayward is one of the better running backs the Eagles will see all year.

“I was proud of how our kids competed last week,” Abseck said. “We didn’t play as well offensively early as I would have liked to see. At the same time, I thought we did a good job defensively keeping ourselves in the game and then they got tired. We are still trying to learn to play four quarters.”