MONIQUE BATSON — Life-saving program should be brought to all schools 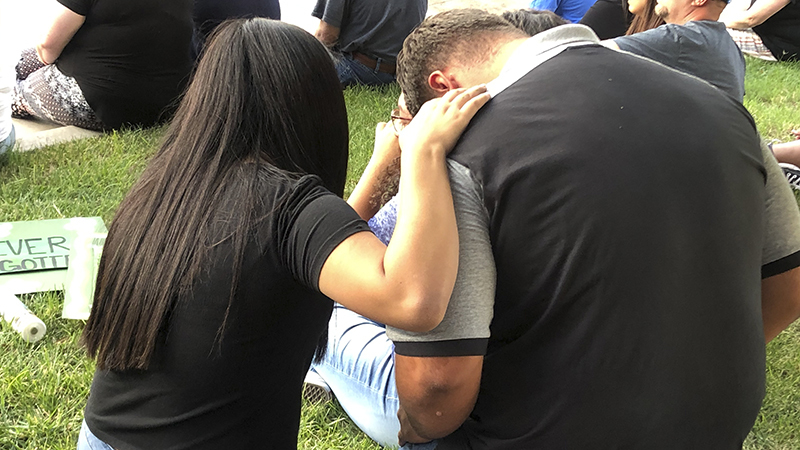 Teens mourn Leliah Hernandez, a 15-year-old killed during a 2019 mass shooting in West Texas. They were more than 1,000 attendees that attended a community-wide vigil the day after the shooting. (Monique Batson/The News)

It’s something he mentioned to me at a recent Rotary meeting, and was welcome information for someone that has a fear of fire.

But having been present during Chief Benson’s panel interview prior to his appointment, there is another program he mentioned that I personally think is a necessity in every community: Stop the Bleed.

If you haven’t heard of it, this national campaign teaches students and community members the basic steps to assist in an emergency prior to the arrival of first-responders. And as horrifying as the reason is, I’ve witnessed first-hand how this quick training program can save lives.

On Aug. 31, 2019, a man began spree shooting from a vehicle while driving through Midland-Odessa. Not counting the perpetrator, there were 32 victims. Yet, only eight died.

And I do not say “yet” and “only” lightly, as I was there. This was prior to my employment with Port Arthur Newsmedia, and was flown in to assist another publication in its coverage. I spent a week in West Texas covering the stories. I was there the night more than 1,000 people gathered at a community vigil and cried for their classmates, their family members, their loved ones and their community as a whole. Truth be told, I cried with them. And still, two years later, I carry in my purse a small book of Psalms handed to everyone on arrival, reminding me daily that life is precious and tragedy can hit anyone with no warning.

While there, I spoke with Dr. Sudip Bose, an emergency physician working at Medical Center of Odessa when responders brought in 14 shooting victims. And while I again do not use the word lightly, only one died.

Bose, who served in the U.S. Army and was the certified physician chosen to treat Saddam Hussein following his capture in 2003, first told me of Stop The Bleed. It was something physicians, first responders and school officials had worked together to implement prior to the mass shooting in 2019.

Many of the community members in West Texas – including students – had been trained to help stop a bleeding wound during an emergency. And, he said just days after the shooting, they did.

It was the first mobile mass shooting in more than a decade. Because of that, victims were left in multiple places thorough out two cities. But with their training, bystanders were able to step in and help until emergency officials arrived. High school students, stay-at-home moms, college professors – people from every age and social demographic – saved lives.

As Bose told me then, “The lesson here is leadership under pressure. What we did as a community in West Texas we can do nationwide.”

It’s something I’ve thought of often since – wanting it for not only myself but also my children. Two are still in school. And whether we want to face it or not, that’s become a dangerous place far too many times.

A woman I spoke to at the West Texas vigil had a 12-year-old son at the time. And as she said, had Seth Aaron Ator opted to shoot on a weekday, it very well could have been when children were playing outside at her child’s elementary school. The campus sits on a road Ator traveled as he shot.

So when Benson, who is also a paramedic, spoke to the panel in early June and mentioned having implemented the program in cities past, I all but stood and applauded.

Having seen how Stop The Bleed can save lives, I hope this initiative is put in place everywhere in Jefferson and surrounding counties.

I implore every fire chief, superintendent, ambulance service, city council and school board in Southeast Texas to research this program and find a way to implement it in our communities.

We don’t need to be doctors to have the potential to save lives.