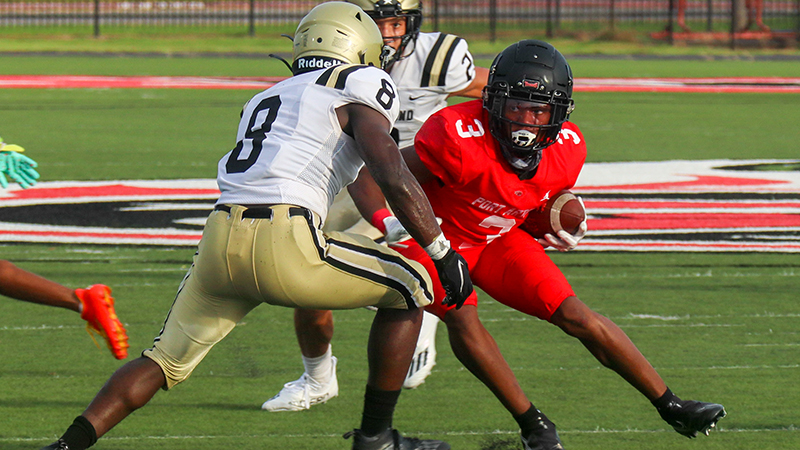 The Memorial Titans will get a small taste of playoff football when they travel to Prairie View A&M to take on Lancaster.

“You are preparing to win and playing to win,” Memorial Head Coach Brian Morgan said. “At the same time, they are still preparation for your district. It is a balance. We are going out to win the game as opposed to a scrimmage. They don’t have a whole lot of bearing on the rest of the season from a record stand point, but you want to win them.”

Morgan said Lancaster should match up well with the Titans.

“We felt like we would have a talented team and they traditionally have a really talented team as well,” he said. “They are going to be able to run just like our guys do. There is not a difference in speed one way or the other. They are going to be like us as far as how they play the game. They run around and strike you. There are a bunch of talented skill kids on offense. This is a really good prep for us. It ends up being like a playoff-type opponent to start the season.”

The last time the Titans took the field was when they were upset in the first round of the 2020 playoffs.

“It has been a long offseason,” Morgan said. “We are happy to be playing football.”

Morgan said the two teams picked Prairie View because it is a midway point between the two schools and both have a strong alumni base at the university.

On the other side of the field, Leon Paul is in his first season as the Lancaster head coach after Chris Gilbert took the position of director of high school relations at the University of Texas.

“I don’t really think Memorial is going to get us ready for district. I think they are going to get us ready for the playoffs,” Paul said. “They have a really great team. They are very athletic and well coached. They are a playoff football team. This is a game that we need to be sharp going into our season. It is good to see that type of competition before we get to the playoffs.”

“I am looking to see my defense,” Paul said. “We had some pretty good scrimmages. We haven’t seen a team like Port Arthur. We are going to see how we really are playing a team that we are not familiar with.”

Paul said he believes the defensive line is the Tigers’ strength.