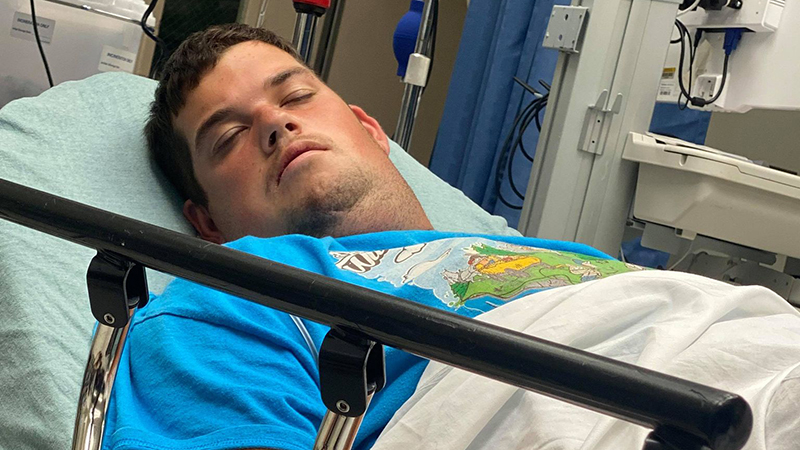 Keyton Daws of Nederland rests in a Galveston Hospital after an assault. (Courtesy photo)

NEDERLAND — An case involving a juvenile who allegedly assaulted a special needs adult in late June has been brought to the Jefferson County District Attorney’s office.

Click here to read more about the alleged assault.

“And attempt to talk to any and everybody involved and make sure we did our due diligence to check out any evidence a crime has been committed or exculpatory evidence that a crime was not committed,” Porter said, explaining that police have that duty.

John Nelson, assistant criminal district attorney, confirmed the case had been submitted to the D.A.’s office.

The D.A.’s office has several options in juvenile cases. It can petition to charge the juvenile with the offense and go to court based on that or it could go to the grand jury.

“It’s too soon in the process to say one way or the other,” Nelson said.

As for a timeline, there is no set date for an outcome.

“We hope to have an outcome beneficial to him and everybody else,” he said.

On June 30, Keyton Daws, 26, a special needs individual, was punched in the face by a teenager while outside the Nederland Recreation Center.

Daws’ injuries were extensive; he had to go to the University of Texas Medical Branch in Galveston, where two plates were inserted in Daws’ mouth to repair two fractures in his jaw.

Other work was performed in Daws’ mouth and the plates will be permanent, his family previously told Port Arthur Newsmedia.

A video of the altercation was uploaded to Snapchat — much to his family’s dismay.

The video shows a male, who appears to be a teenager, telling Daws “I just told you not to say it again” as a punch connects with Daws’ face.

It is unknown if this particular video was submitted to police and the DA’s office.

Police described the altercation as an isolated incident.