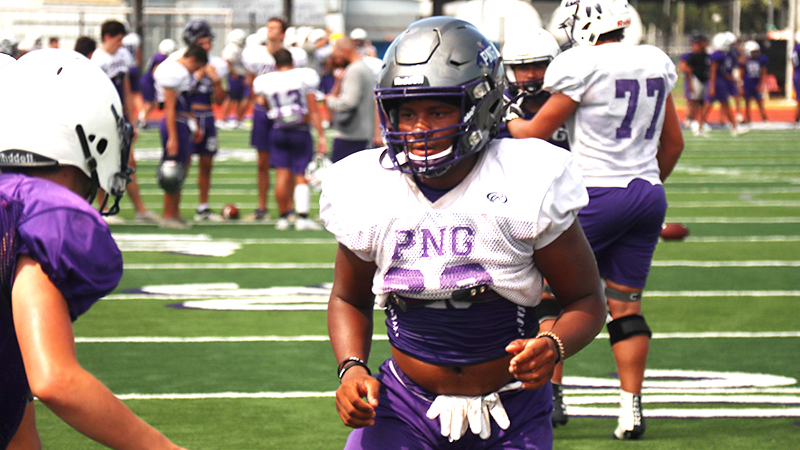 PORT NECHES — Many will be hard pressed to find high school football teams that still use an H-back, but Port Neches-Groves coaches believe they have the prototype with senior Daylon Bergeron.

“Daylon is very physical,” Head Coach Brandon Faircloth said. “He does whatever it takes to make his team win. He is very unselfish and plays a wonderful position. He gets to catch touchdowns and gets to block. He gets to do a little bit of everything and run with the football. He is built for it. If we could make someone in a lab to be our H-back, it would look like Daylon Bergeron.”

The position is designated for a back that lines up closer to the line of scrimmage than the backfield. They do not typically run the ball much and are commonly used to block and catch short passes.

Last season, Bergeron caught a short pass to win the Bum Phillips Bowl over rival Nederland in the final seconds of the game. 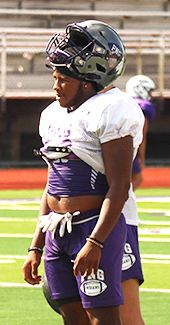 Daylon Bergeron takes a break as he watches his teammates during practice. (Chris Moore/The News)

“It was a surreal moment,” he said. “Everybody understands the hype and the energy. It was a crazy moment. I was just glad I could make that play for the team.”

His head coach said there was never any doubt about going to Bergeron.

“We have all of the confidence in him,” Faircloth said. “It was the perfect play at the perfect time. We were on the left hash mark and Blake (Bost) is left handed. That is the play we wanted. To throw the ball to him is as good as it can get for our offense.”

Bergeron said he had only one thought when the play was called in the huddle: “Get in the end zone.”

“We don’t have to rotate,” Faircloth said. “We don’t have to substitute. He can line up at receiver or the backfield. He lines up at running back sometimes. When you have a guy that can do that, it makes it tough on defenses. They don’t know what you are about to do.”

Aside from the schematic advantages, Bergeron wants to provide his team with high energy and leadership.

“We need a lot of senior leadership this season, and I want to bring that to this team,” he said.

Bergeron said he was not satisfied with last year’s 5-6 record.

“That is not good enough,” he said. “Our goal is to do much better this year.”

When not on the field, Bergeron is either eating or hanging out with his girlfriend. He said his favorite subject is math.

“I am a beast at algebra,” he said laughing. “Math has always been my strongest subject. I think I am the best at it, honestly.”