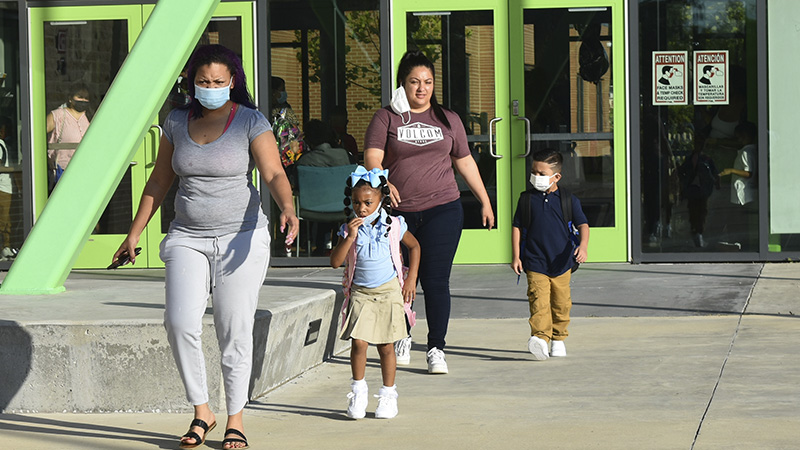 Nashae Kennerson and daughter Nyla Kennerson, in front, and Belen Valencia and son Edwardo Estupian are seen on the first day of school in Port Arthur. (Mary Meaux/The News)

Less than 24 hours after the Texas Supreme Court temporarily suspended Gov. Greg Abbott’s ban on enforcing masks in public schools, the Port Arthur Independent School District was the first local school district to reinstate mandatory masking for anyone on campus.

An amended dress code will state that, beginning Monday, anyone on a PAISD campus will be required to wear a mask.

In July, the governor signed an executive order that prohibited government buildings and public schools from requiring masks. However, according to a report from the Associated Press, nearly 50 schools in Texas have enforced masking policies this school year in spite of the order.

The decision made by PAISD, which announced three positive cases at Memorial High School on the second day of the 2021-22 school year, is not in violation of state law as the announcement followed the temporary restraining order issued by the court.

“As Superintendent of Schools, I am charged to do what is in the best interest of all students and staff,” Dr. Mark Porterie said in a written statement. “My action to require mandatory masking is a far cry from mandatory vaccines, but some may regard it as just as bad. I cannot stand by and not do anything.” 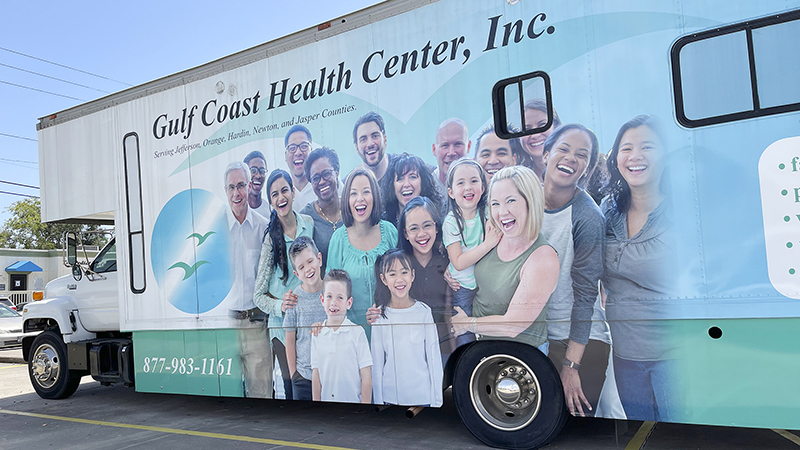 Porterie said the district would meet weekly with local health agencies to determine how long the new policy remains in place.

Another change to public schools that occurred this week was a decision from the Texas Education Agency requiring all Texas school districts to notify district employees and the families of students that have come in close contact with a COVID-positive person.

But a main concern in the pattern of positive cases, said Port Arthur Health Director Judith Smith, is that those most affected are now in the younger age range. Smith publishes a report of case numbers each day on the city’s Facebook page and website, in which residents case see case numbers by age range.

The Port Arthur Health Department, which serves all of Mid and South County, has seen a jump in vaccine requests since the Centers for Disease Control requested those who are immunocompromised receive a third, or “booster,” shot.

Anyone who received the Moderna or Pfizer vaccine has also been asked to take a booster shot eight months after the date of their second shot.

On Tuesday, just hours before it was announced that Abbott tested positive for the virus, Jefferson County Judge Jeff Branick announced a joint effort with Hardin, Orange and Jasper counties to repurpose the former Golden Triangle ER on Eastex Freeway in Beaumont into a Regeneron monoclonal antibody treatment center for COVID-positive individuals.

“We met with all the area hospitals about the potential of an infusion center, the main goal of which is to administer monoclonal antibodies to those individuals who test positive…prior to the time they require hospitalization,” he said during the weekly Commissioners Court meeting.

Baptist Hospitals of Southeast Texas, which is currently administering infusion treatments, will prep the building for use, Branick said. Once open, the number of patients available for daily infusions will rise from about 30 to 150.

While a timeline on when the center will open was not announced, Branick will be addressing the issue from the center on Monday.

Smith said daily positive cases has remained steady at approximately 50, but it is still a large jump from numbers reported in early summer.

And as the school year has resumed, she said the best way parents can protect themselves and their children is to make sure everyone in the household 12 and older has been vaccinated.

“And it’s going to be important for masks to be worn to help prevent the spread of this disease,” she added.

At PAISD, Porterie said even prior to the new enforcement, the district has been “strongly encouraging” the use of masks among staff and students.

“Our schools have reopened for in-person instruction,” he said in the written statement. “Our hospitals are overcrowded and, unfortunately, 40 percent of our staff have chosen not to be vaccinated at this time.”

According to the Beaumont Health Department, 41.5 percent of Jefferson County residents have been fully vaccinated.

On Aug. 18, Jefferson County had surpassed 75 percent of COVID-19 ICU beds in use.