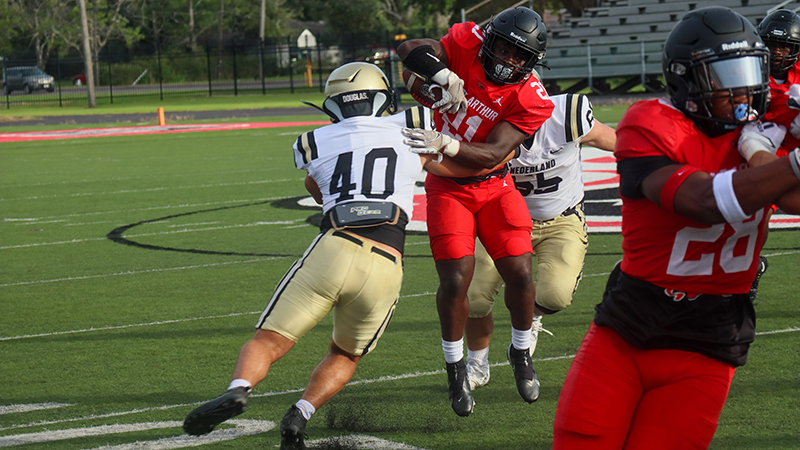 Area coaches will go and “grind the tape” to see how their respective teams stacked up in the final scrimmages in preparation for Week 1 of the high school football season.

The Nederland Bulldogs and Memorial Titans faced each other at Memorial Stadium, while Port Neches-Groves took on West Brook.

“You always want to improve from the first scrimmage to the second scrimmage,” Nederland Head Coach Monte Barrow said. “I know Hamshire-Fannett was a formidable opponent for a scrimmage. I think moving up to Memorial, our kids found out there is a different level in some positions. You have to be ready for that on Friday night in our district. If you wait two quarters to figure that out, it will be too late.”

“I think the sense of urgency is big for us right now,” he said. “We are going to start harping on that, because West Orange is not going to be any different.”

On the Titans sideline, Memorial Head Coach Brian Morgan said his team did a much better job of cleaning up small mishaps.

“I think we only had one offsides on defense and one false start on offense,” he said. “The false start really hurt us because we were on the 2-yard line. We didn’t have any personal foul issues. That was good. We are getting there.”

Morgan said the starting receivers struggled to catch the ball in the first scrimmage against West Brook but bounced back Thursday.

“We put the ball on the ground one time with the first group (down on the goal line),” he said. “We have to clean that. We can’t waste scoring opportunities. We caught the ball much better. We had one or two drops still, but it was much better. We are trying to figure out the receiver rotation. We know we have four backs that are good. We have two receivers that played a lot and we are trying to figure out the other two spots.”

“I think we have to do a better job of finishing our blocks,” he said. “We have to do a better job of tackling in space. When you play West Orange-Stark and West Brook, those are going to be deficiencies. The reason we play tough people in our scrimmages is because it gets us ready for our season. (West Brook Head Coach Chuck Langston) and (WOS Head Coach Cornel Thompson) definitely do that. We like it that way. We want someone to show us where we need to get better and we will spend practice time doing it.”

Faircloth said he was pleased with how his team defended the run Thursday.

“We gave up some big plays on defense,” he said. “(West Brook quarterback) Bryce Anderson is a wonderful athlete. Our defense really stopped the run a lot better than they did the week before. That was a big thing for us. We have to fix some things, but that is everybody.”

PNG will host Jasper with all three games kicking off Friday.