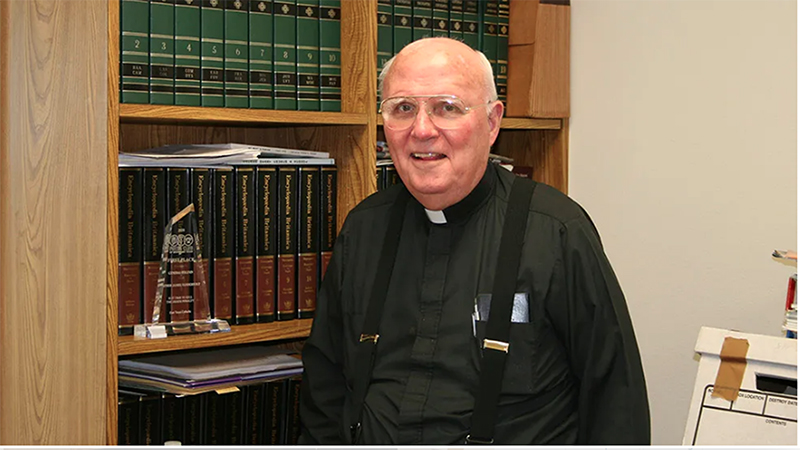 The recent passing of Msgr. James Vanderholt, 88, brought memories of how the retired priest from the Catholic Diocese of Beaumont was more than a parish priest; he was an author, educator and historian.

I remember him as philosophy instructor at then Lamar University-Port Arthur. I was pleasantly surprised to see a priest lead the course, though I don’t remember him announcing it as such.

The course was very enjoyable and focused on various aspects of philosophy, not just from the Catholic standpoint.

According to information from the Diocese, Father Vanderholt’s family nickname was “Uncle Mister.” He was an avid college football fan, with Notre Dame being his favorite.

Cathy Meents remembers her first trip to College Station as a child was with Father Jim. He took her and her sisters to an Aggie football game, but first, and most important to him, they had to see the arrival of the Aggie band. He loved the Aggie band! She said that was a fun and memorable day, according to a story on the Diocesan webpage.

One of the last trips Meents took Vanderholt on was to Kilgore, Texas, to see the Kilgore College Rangerettes perform. His great-niece, Rachel Meents, performed as a member of the 74th Line in that show.

He was ordained by Bishop W.J. Nold on May 25, 1957. In September 2009 he was appointed a Prelate of Honor to His Holiness with the right to the title of Reverend Monsignor.

In an interview for his 50th anniversary of ordination, Msgr. Vanderholt shared part of his vocation story. He said growing up in the church and going to Catholic school all your life, “you were always aware of the notion that you should become a priest or a brother or sister.

“A priest once told me that if the thought lingers in your head for a few years that you should devote your life to that path, it’s probably worth looking into. When I finished high school the thought was still there. It was a decision of indecision,” he said in the Diocesan article.

Vanderholt taught at several Catholic schools and was superintendent of Catholic Schools for the Beaumont Diocese from 1967 to 1975 and served as chairman of education for the Texas Catholic Conference.

“In addition, Father Vanderholt continued his own education with a bachelor’s degree from Lamar University, four master’s degrees and a Doctorate of Ministry in 1987 from the San Francisco Theological Seminary,” the document read.

He loved Texas Catholic history and would vacation to places to study the history and was author of a number of parish histories and more.

Vanderholt also served a number of parishes across the Diocese including in Port Arthur, Beaumont, Sabine Pass, Lumberton, Orange and Silsbee.

At 2 p.m. on Sunday will be the reception of the body at St. Anthony Cathedral Basilica in Beaumont. Visitation and viewing will be 2-6 p.m. Sunday with a vigil service at 6 p.m.

Funeral Mass will be celebrated at 10 a.m. Monday at St. Anthony Cathedral Basilica followed by interment at Magnolia Cemetery. A reception will follow in the Cathedral Center.

The Catholic Diocese of Beaumont contributed to this story.