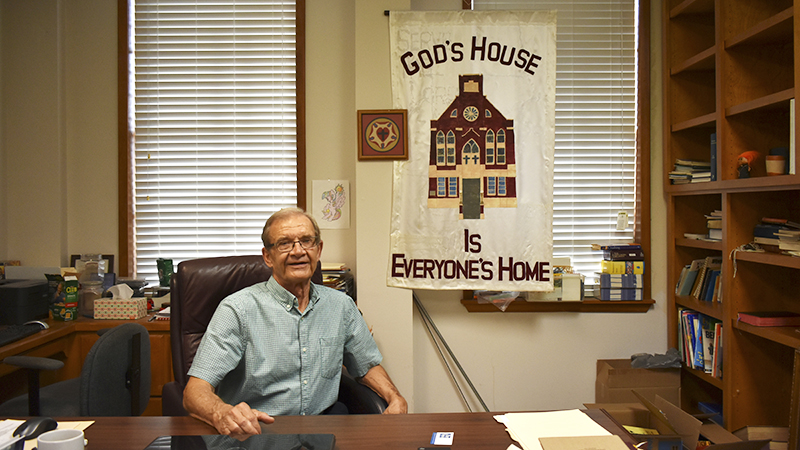 While the brick and mortar building where the congregation of Trinity Lutheran Church worship will change, the message will remain the same.

The Rev. Tim Dinger has led the flock at the Port Arthur church for the past 36 years. The final service at the 2400 Fifth St. church is set for 2 p.m. Sept. 19. There will be no morning service that Sunday.

The congregation will join with that of St. Paul Lutheran Church, 5801 West Washington in Groves.

The Groves church will hold its last service at 2 p.m. Sept. 12.

The two groups will join as one at the Groves location to become Peace Lutheran Church.

“Both congregations found themselves at a place where they felt like they could do things better together,” Dinger said from his office earlier this week. 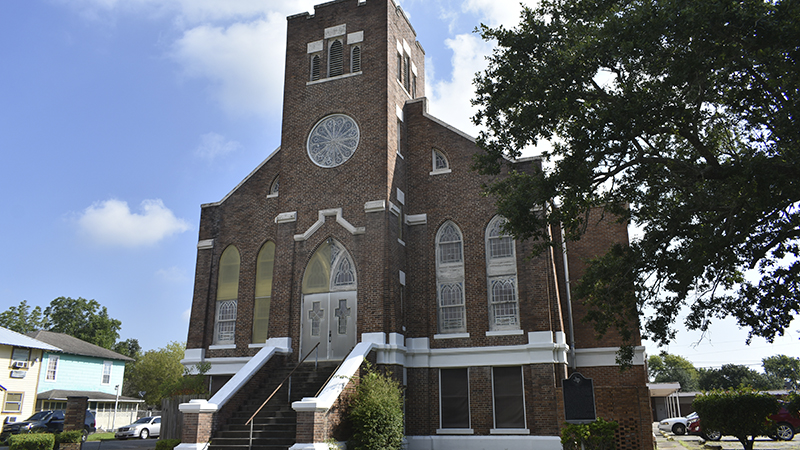 A view of the outside of the Port Arthur church. (Mary Meaux/The News)

Trinity Lutheran’s congregation dates back 122 years to 1899, as it was the first Lutheran church in the area.

A Texas Historical Commission marker outside Trinity Lutheran tells of how the church began. Twelve people heard the Rev. C.G. Kuppler of Louisiana deliver the first German Lutheran sermon in the area in early 1899, the marker reads. The small group applied for a regular pastor and the Lutheran Mission Commission sent Dan Poellot, a theological student, who served approximately six months.

Pastor Kuppler installed H.C. Gaetner of New Orleans as pastor of the Port Arthur church and assigned him to minister to others in Beaumont and Orange as well.

The Port Arthur congregation established a church constitution in 1899 and incorporated as “The Evangelical Lutheran Trinity Lutheran Congregation of the Unaltered Augsburg Confession” in 1901.

The church and school burned in 1902 but the congregation rebuilt in 1903.

The church membership doubled in size and was self-supporting by 1904. The industrialization following the Spindletop Oil Boom, and during World War I caused Port Arthur to grow rapidly, the marker reads. 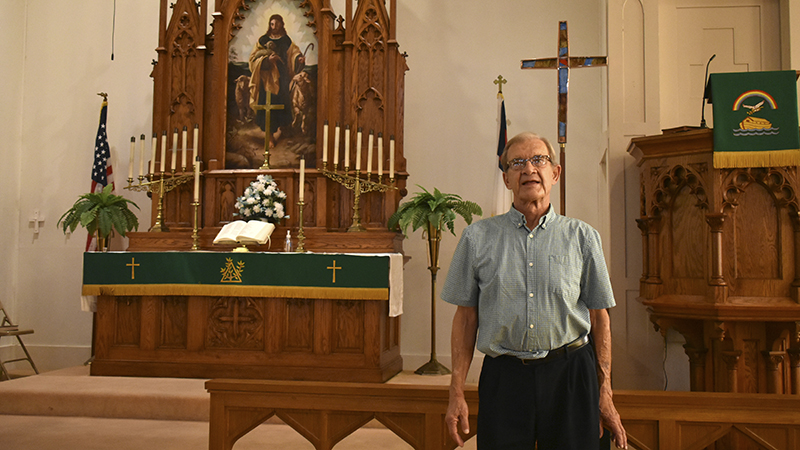 Joyce Mackey, who recently celebrated her 91st birthday, has attended Lutheran Trinity since the day she was born.

Mackey was born with a medical problem and baptized that day, hence her lifelong membership, she said.

She looked back to a time she attended the church’s school, saying they put on a play every year and would practice for months before the production.

“We had fond memories of the church. We had good Christian teachers,” Mackey said.

And when Trinity Lutheran and St. Paul congregations unite, she will be there. While she hoped leaders would choose the name “United Lutheran” she’s OK with the current choice.

“I look forward to it,” she said of the new combined congregation. “I’m sure it will be an adjustment for all of us to make, but I think it’ll all come out good in the end.”

Church secretary Linda Turner was also raised in the church; she and her siblings attended school from 1st to 8th grade.

She laughed while saying she got in a lot of trouble in school. She fondly remembers the teachers and friends made while there.

Her father was Lutheran from a German town and her mother was Baptist. Dad brought the children to church and her mother later became very involved with Trinity Lutheran, she said.

“It’s just you remember having to go to Confirmation and doing memory verses and the teachers. I can name all of them I had,” Turner said. “It creates that Christian fellowship and both of our (her and husband) sons came here for a while. It was tough for me and it was tough for my oldest to go to a public school.”

It was hard, she said, because he was shy.

“I can truly say it’s a blessing. When I went to school here I hated it and I wasn’t going to send my kids here but it’s the very first thing I did,” she said. 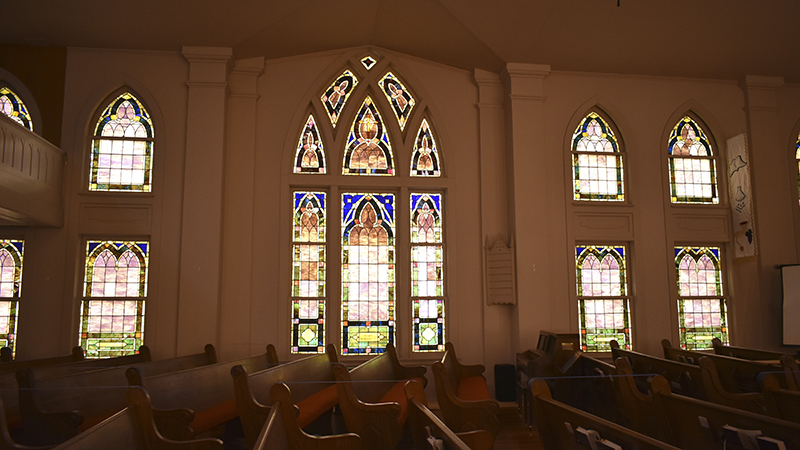 A view of the painted windows in the church. (Mary Meaux/The News)

Dinger said he has tried to help the congregation see things can be better joined together.

“You can do more for the community,” he said. “You can be stronger in proclaiming the gospel than having a small group of 30-40, not that a small group can’t be effective. I just think you’re better together than trying to do it all on your own.”

Through the years the church has successfully reached out to neighbors. It was the congregation that initiated an outreach to the community for immigrants. They began with the Vietnamese community, brought in a Vietnamese speaking Lutheran pastor and started a successful English as a Second Language program.

Next came an influx of Spanish-speaking individuals so the ESL program changed to accommodate this new need, Dinger said.

A Spanish-speaking Lutheran pastor from the Baytown area was brought in and has remained approximately 10 years.

“So, that outreach ministry still continues,” he said. “When the two congregations, the congregation in Groves and the congregation in Port Arthur, started talking about ways they can reach the community — well, they were aware of this program so they said when we come together as Peace that would be a good thing because that’s a need not just in Port Arthur. There’s a Spanish speaking community in Groves, it’s in Port Neches, so there’s that need here.”

One change that will happen is Dinger will eventually retire. He serves as interim pastor for St. Paul while full time pastor at Trinity Lutheran.

A search is underway for his replacement but a retirement date has not been set.

Dinger realizes some, not all, of the congregants at Trinity Lutheran may be apprehensive of the change, as they are used to the tall brick building on Fifth Street with the painted windows featuring Christian themes.

“There are a lot of changes and changes can be painful for many people but what is the blessing, from my perspective, is there’s one thing that’s not going to change and that’s the message that comes from God’s word; that he died for us, gave His son,” he said. “That message will not change I don’t care where we go.”