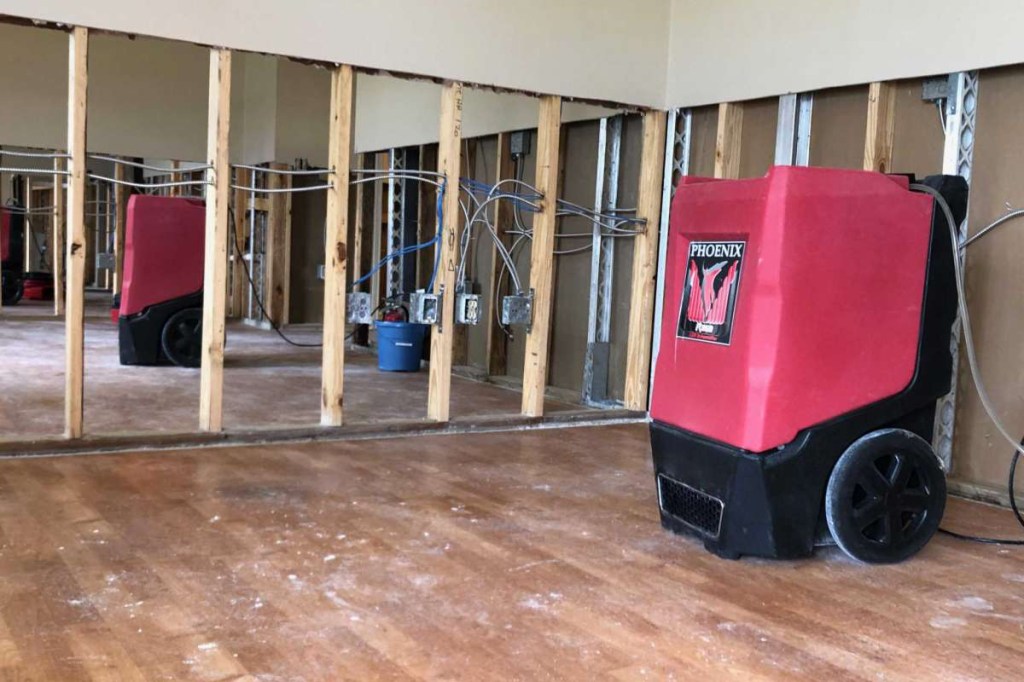 The Family Services Women and Children’s Shelter was destroyed by Tropical Storm Imelda in 2019. It had only been open three months due to repairs needed by Hurricane Harvey. (Monique Batson/The News)

The only shelter in Southeast Texas for victims of domestic violence and sexual assault is seeking funds to move after back-to-back disasters destroyed the center and everything in it.

The facility, operated by Family Services of Southeast Texas, serves six counties. The physical location is intentionally withheld from publication to protect the residents.

This week Jefferson County Commissioners approved a request from Family Services to relocate. While a new destination has not been chosen, the request was an advance move to help push the shelter in the right direction — quite literally.

“We’re actually asking for money so we can look for property to buy or build on,” said Bonnie Spotts, director of community relations. “It’s flooded time and time again.”

When Hurricane Harvey hit in 2017, the shelter was damaged so badly that it took nearly two years to reopen. But three months after it did, Tropical Storm Imelda brought it back down to nothing but a frame and a bit of sheetrock. The more than 50 residents had to be brought to other shelters across the state.

Currently, there are 65 residents. And each time a tropical storm threatens the Gulf, they have to be evacuated, which costs approximately $30,000.

“That eats up the money we need,” Spotts said.

During the February ice storm, the shelter again was evacuated to nearby hotels as officials dealt with busted pipes and water damage.

If you need help

Approximately 40 percent of women and 35 percent of men in Texas have or will experienced physical or sexual violence, according to the National Coalition Against Domestic Violence. On average, domestic violence hotlines in the state receive 21,000 calls per day. Any victim of domestic violence or sexual assault in Jefferson County, including Mid and South County, can seek help from Family Services of Southeast Texas. The shelter has 65 beds as well as 17 transitional apartments.

The apartments, Spotts said, allow residents to stay for up to 18 months rent free while working so they can save money to restart on their own. Furniture, housewares, etc. are available at no cost, and there is also a boutique where everything is free to residents. Counseling is also free to residents. For more information, call (409) 833-2668.

In addition to outside funding, the shelter operates two resale shops, one in Woodville and one in Jasper, that help supply money to the organization, Spotts said. The shelter accepts clothing and housewares in good condition. What can’t be used at the facility is used in the resale stores. Individuals can donate at the main office, located at 3550 Fannin Street in Beaumont. Calls, texts and chats can be reported to the National Domestic Violence Hotline at thehotline.org.

Recognizing a need for help

During the 2020 lockdown, calls to the Texas Department of Family and Protective Services dropped significantly, according to a report by The Texas Tribune. “But child welfare workers recognize the pattern,” the publication stated, noting the same drop occurs during the summer when children are not seen as often by teachers or childcare workers. In May 2020, the Canadian Women’s Foundation published a hand signal to be used for victims of domestic violence seeking help — first tucking a thumb to the palm and leaving four fingers extended, then folding the four fingers over the thumb. The gesture spread quickly, and is now considered the international signal for help.