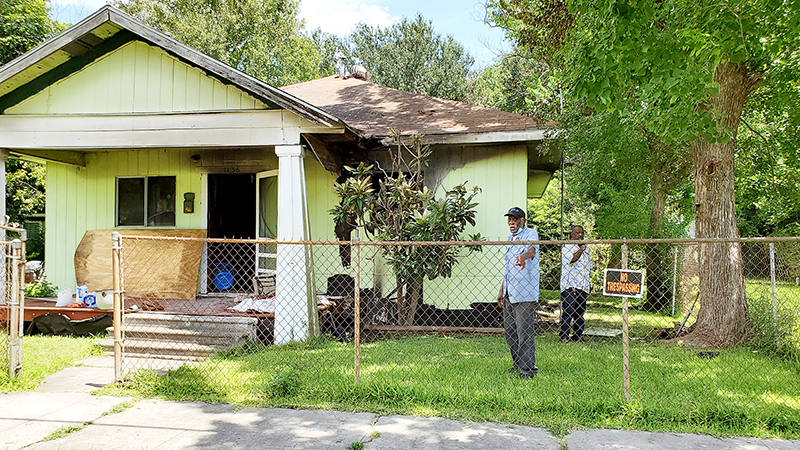 Robert Thomas Jr., in front, and his brother Michael Thomas were cleaning and securing their family home following an early morning fire Tuesday in the 1100 block of Vicksburg Avenue. (Mary Meaux/The News)

A 71-year-old Port Arthur man was flown to a Galveston hospital for burns he suffered during a house fire Tuesday morning.

The victim, Lawrence Thomas, and his brother Michael Thomas were inside the home at approximately 6:05 a.m. Tuesday in the 1100 block of Vicksburg Avenue when the fire occurred.

The men were able to get out of the house during the fire. Lawrence went back inside the structure and had to be pulled out by firefighters, Port Arthur Fire Department Battalion Chief Jay Fountain said. 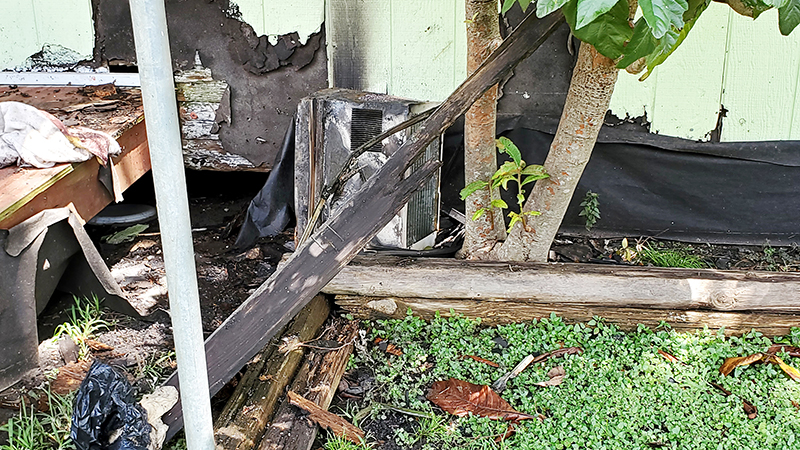 A charred air conditioning unit lay outside a home Tuesday in the 1100 block of Vicksburg Avenue following a morning fire. (Mary Meaux/The News)

Robert Thomas Jr., another brother, was at the house Tuesday afternoon with Michael Thomas as they cleaned and secured the home.

The screen door to the home was open, giving a view of the smoke- and water-damaged front area. To the right on the ground was a small, charred air conditioning unit.

Fire damage could be seen at a small window with black soot making a V up to the roof.

Robert said Lawrence had gone back inside to get some papers, his phone and car keys.

Fountain said the victim had second-degree burns to his arms and back and was suffering from smoke inhalation. He was brought by ambulance to Riceland Medical Center in Winnie to meet with a helicopter to be taken to a Galveston hospital.

The fire was quickly brought under control, Fountain said.

Damage was contained mostly to one room, and the rest of the house had smoke and heat damage.

Lawrence’s brothers said the fire was caused by an extension cord from the air conditioner that was near a mattress.

PAFD is investigating the cause.