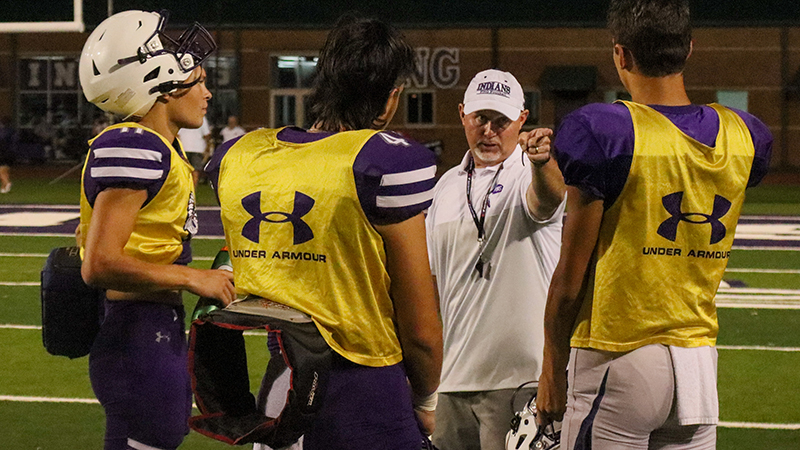 PORT NECHES — With Week 1 of the high school football season ready to kickoff next week, teams are gearing up for their final scrimmage.

For Port Neches-Groves, the Thursday scrimmage is all about preparing for Week 1 opponent Jasper.

Both scrimmage teams will play three quarters in order to keep both sides rested heading into the official start of the season.

“As coaches, sometimes you don’t know what you need to work on until the scrimmage,” PNG Head Coach Brandon Faircloth said. “You have to see guys in live fire. You get to see things that you have to work on and get better at. We aren’t trying to get better for West Brook, we are getting ready for Jasper. We are thinking about the first game over here. (Scrimmage opponents) West Orange-Stark and West Brook are going to prepare us to get ready for Week 1.

“We want to be a week better,” he said. “I thought our guys did some good things last week. We had some missed assignments. We had some coverages that we need to get corrected. We had some dropped balls. It was just little things that we have to get better. West Brook is going to continue to show us what we need to work on.”

Faircloth said his team is fortunate to go up against the Bruins.

“Coach Langston and his staff do a great job over there,” Faircloth said. “We are excited to scrimmage them. We are just looking to improve on our deficiencies. We have to get better at the fundamentals, like blocking and tackling.”

Mishaps in blocking and tackling are common in the first preseason game, the PNG coach said.

“We always have a really big improvement between the first scrimmage and second scrimmage,” Faircloth said. “It is just different going against someone else versus going against your teammates. We are just looking for improvement. We are working hard.”

A donation will be taken at the gate for Our Day to Shine, which goes to the Texas High School Coaches Association benevolence fund.

The freshmen teams will start at 5 p.m., followed by the junior varsity teams at 6 p.m.

The varsity squads kick off at 7 p.m. Thursday in Port Neches.

Read more: Memorial and Nederland getting ready for a physical contest this week.