CULLINARY THRILL SEEKING — Texas books are in the stacks 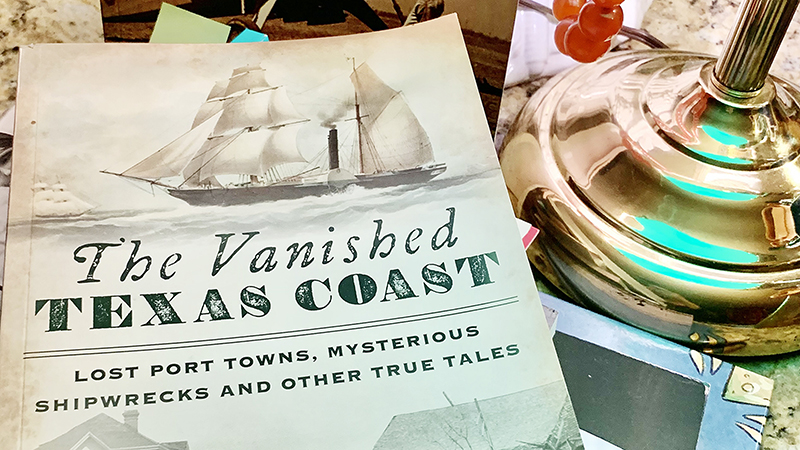 Read up on these finds:

Some Texas books are in this mix, including one by Penny L. Clark, an area historian I’ve had the pleasure of meeting over the years. She’s writing in “Images of Aviation: Beaumont’s Civil Air Patrol in World War II,” filling in gaps on the short-lived but vital operation.

You just may know some of the men and women pictured in this book. It’s from Arcadia Publishing, arcadiapublishing.com. It’s one of those neatly packaged issues on very interesting topics.

Some others in this line are on a rack at the Nederland CVS on FM 365.

The USS Seawolf Submarine, honored in Galveston, was sunk by friendly fire.

The Battle of Sabine Pass is a chapter topic. History Press, historypress.com, put out this book.

“Texas True Crime Miscellany” – The Flapper Bandit had claimed she was from Beaumont. But her real mission wasn’t collecting news. She was set to claim some bank money and locked folks in vaults to get her way.

Another woman aimed and got a man in a courthouse. She said he’d done her wrong, but some bystanders got her bullets, too.

Do you love cheese and bigfoot? — I know lots of dads who make up great – stories for their kids. Sometimes there’s a sneaky message, like eat your veggies.

Do you know a kid who needs to be persuaded to eat cheese? I don’t. But “Cheesemaker Durdsen” is a lesson on not giving up.

The townsfolk did not like his mediocre cheese and he kept going until they could not get enough of his cheese. Readers even get the secret … Bigfoot’s stinky feet. What? Gross? You bet. Will kids love it? You bet.

Have some later, but be warned you’ll have some feet visions associated with it after this fun. Www.brown books kids.com will connect you to some fun reads.

Aldi – Aldi shopping is a fun adventure for me as I run across these “little” markets when traveling. Besides sticking a quarter in the box to get a shopping card (refundable upon departure) and bagging your own buys, Aldi remains an adventure.

I like looking through very reasonably process tins of fish, vegetables and even wines. There are plenty of tempting snack foods I avoid, and their produce and frozen food is much beloved.

Again, I skip those aisles because I’m traveling. In “The Unofficial Aldi Cookbook: Delicious Recipes Made with Fan Favorites from the Award-Winning Grocery Store,” Jeanette Hurt shares her creations.

Images of Breakfast Hash Brown Casserole and Best Tuna Melt Ever will make a believer out of you.

If you’re already an Aldi lover tell me what you like. If you haven’t ventured in one, please see what everyone is buzzing about.

2 cups Season’s Choice frozen fruit, such as strawberries or tropical fruit blend, or other frozen fruit of your choice

Place all the ingredients in a blender fitted with a standard blade.

Blend until completely smooth, about 5 minutes

“The Hard Seltzer Cocktail Book” — You can’t get from one place to another without seeing a billboard for a new sort of fizzy refresher, for adults especially.

Casie Vogel has independently authored and published “The Hard Seltzer Cocktail Book” with 55 unofficial recipes using brands you have probably heard of.

Prosecco makes a Boozier Bellini and generic rose and grapefruit hard seltzer can go into your Sparkling Frosé.

These photograph well and are sure to impress guests. You can imagine all kinds of colorful pastel fruity pretties.

But the most unique blend I caught here is the Bubbly Mary with lemon hard seltzer fizzing up your brunch vodka and Clamato. Garnish suggestions include celery, olives, cornichons, shrimp and bacon.

Darragh Doiron is a Port Arthur area foodie with a new head shot by Jerome Cabeen, the local photographer who’s been up at Museum of the Gulf Coast. If you want one of your own, contact him at facebook.com/WINDOWWORLDPhotography. Contact Darragh at darraghcastillo@icloud.com.