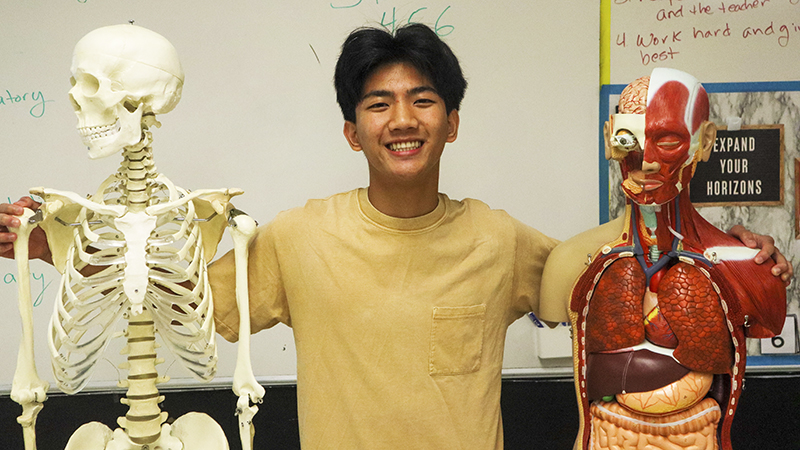 “He had it in his back yard and front yard,” Nguyen said. “It always interested me with all of the plants and beauty.”

Nguyen continued to cultivate his love for the living. His favorite school subjects are science and biology but he doesn’t yet know what career path he wants to pursue after high school.

“I really like helping people,” he said. “I might go into the medical field and become a doctor. I don’t know what field. I do love plants and animals.”

The passion for helping others spills into many areas in the Bulldog’s busy life. When not in the classroom he is involved in multiple activities like Key Club and is on the cross country team.

Nguyen, who was elected as the senior class president last spring, is a first generation Vietnamese American. He said his father dropped out of high school.

“(My dad) and my grandparents had to come over because the communist North tried to take over and they left,” he said. “…I don’t really have relations with my dad that much, because he has to leave every few months to go shrimp out on a boat. I see him like three months out of the year.”

The Nederland senior said he usually stays with his step mom and grandparents.

“I am just trying to become a better me,” he said.

Nguyen likes to give back by doing his part to keep Vietnamese culture alive. He attends Queen of Vietnam Catholic Church in Port Arthur.

“It is an area where there is just Vietnamese culture and people,” he said. “We have a school set up there to teach young kids and young Vietnamese people to get the culture back in. We want it to bloom in the area. I love it and I don’t want it to die out.”

Due to the cost of out-of-state tuition, Nguyen said will attend a college in Texas.

“It does not matter where I go to for my four years of my undergraduate,” he said. “Might go to (Texas) A&M with my sister or UT-Dallas for the technology.”

Nguyen said he ran for school president because he wanted to represent the school.

“It is just nice to be leading the pack” he said. “It’s not really that much. I am just one of the people.”

Here’s how to donate blood this week, get a…