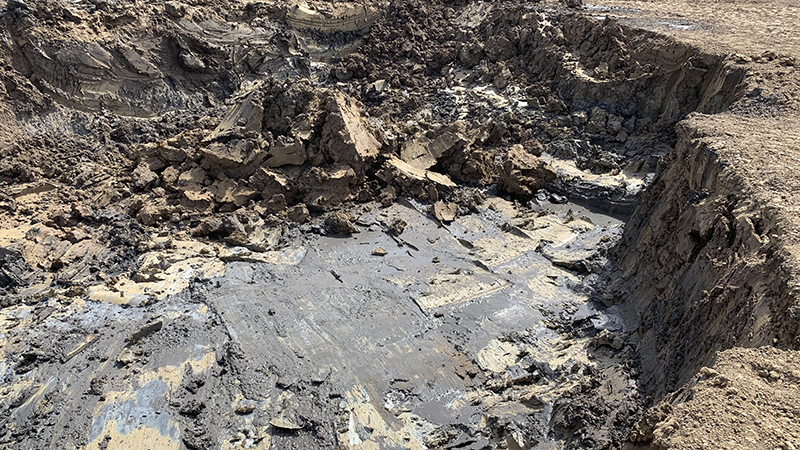 Naval debris, at times buried 10 feet deep, are shown in the ground under what was Woodcrest Elementary in Port Neches. (Photo courtesy of Jeff Bergeron)

PORT NECHES — For decades, Woodcrest Elementary School educated thousands of students. But one of the biggest lessons from the campus possibly came this year, when officials discovered the school had been built on top of a former U.S. Navy base.

The discovery came during excavation, as crews started digging to plant piers used in what will be the foundation of a new school. The intermediate school construction funding was overwhelming approved by voters in a 2019 bond issue to consolidate seven elementary schools into four new schools.

“Directly in the back of Woodcrest, you have the faculty parking lot that used to be there,” explained Jeff Carbone, senior project manager for CBRE. “Well, behind that where the playground was, when we started digging down there, we started to dig up wood. And there shouldn’t be wood under there.”

As they continued to dig, they noticed all of the wood had a common hue — battleship grey.

“We did a little homework and found out that there was a Naval barracks there built back during WWII,” Carbone said. “We think — we’re not sure but we think — it was there because TPC and so many other refineries were there to build rubber for the war effort and they were there to oversee those operations. We don’t have validation of that yet, but that’s the only reason we can think of as to why they would just put a Naval barracks there. But there were officers’ quarters.”

However, that might not be the only surprise to come from the construction of the new schools.

During excavation of West Groves Education Center, it was also discovered that another structure had been buried below the building.

“We kept hitting something out there,” said Director of Maintenance Jeff Bergeron. “And so we’re understanding and what Dr. (Mark) Gonzales has told us is that there was possibly something there before West Groves.”

What it was, Bergeron said, has not yet been determined. 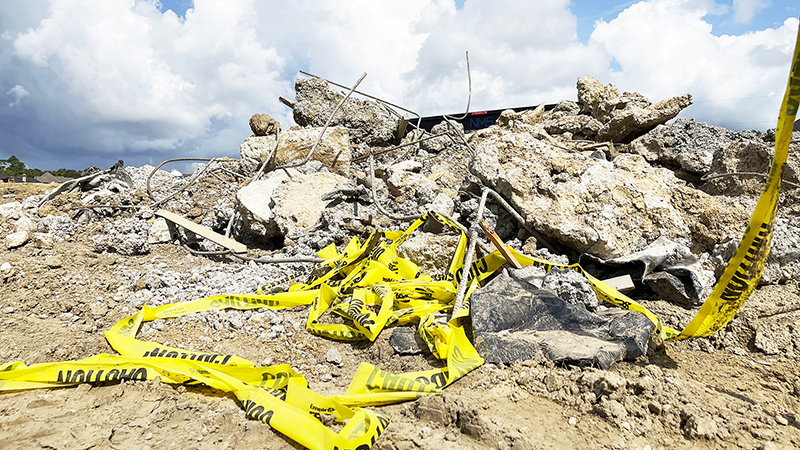 As crews began excavation on what was Woodcrest Elementary School, they found the campus had been built on top of an old Naval base. (Monique Batson/The News)

“This is not uncommon. Not at all,” said Carbone, who has assisted in building places such as Texas Children’s Hospital. “Houston is big on this. A lot of cities, when they demo a building, they just bury it where it is because it’s too expensive to demo it and haul it off, so they leave it for the next guy to clean up. And it’s unfortunate but we kind of expect it.”

In 1983, during the construction of a building, Carbone said his crew came across dinosaur bones. And after historians confirmed it was a dinosaur burial ground, the project was postponed for 18 months to conduct an archeological dig.

But in Southeast Texas, he said, his concern is digging would lead to oil or water.

The latter, Bergeron said, may help explain the Naval barracks.

“You wonder why but if you go down the river towards Beaumont, you had the mothball fleet,” he said. “So it makes sense.”

In 1946, Congress created the mothball fleet shipyard in an area between Beaumont and Mid County to store and repair Naval vessels during WWII.

While officials were unable to determine exactly how many military buildings were located where Woodcrest was eventually built, Bergeron said they found debris in multiple places.

After discovery, the materials were tested to ensure they weren’t hazardous. But then came the removal.

“When we dig down we excavate down a certain number of feet to get clear dirt so that the piers don’t move,” Carbone said. “We want them to be as solid as possible. So when we started digging down and we get debris and rocks and pieces of wood, we had to ship all that stuff out of there and bring in hundreds of yards of fresh, clean dirt that we could compact so that we had a place to put the piers in.”

The total cost was $78,000. However, it did not cost the district at all, as the funds were built into the general contractor’s contingency plan.