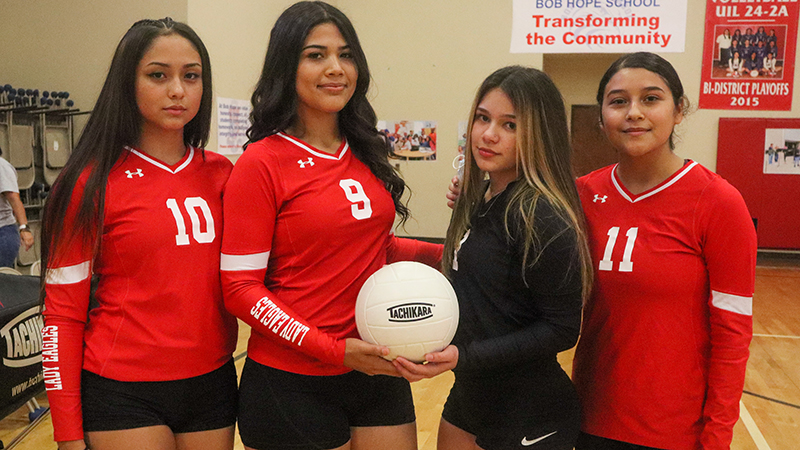 From left to right: Jennifer Lopez, Ruby Perez, Maria Fernandez and Victoria Gutierrez are ready to take the Eagles to the next level. (Chris Moore/The News)

For the past two years, the Bob Hope volleyball team finished third in the state tournament. This year, the Eagles have a veteran group with their eyes on taking the next step.

“I have had most of the girls since they were in eighth grade,” Head Coach Christian Cruz said. “I think all of the years we have worked together are showing. The first game we played a little slow, but we came from behind to win 3-0. I feel positive about this year.”

Cruz said his first goal for the season is earning the top seed in the tournament.

“I think this year we can win it all,” he said.

Senior Victoria Gutierrez is the setter for the Eagles and one of the team’s leaders.

“She is an excellent server and her sets are very clean,” Cruz said.

On the outside, the Eagles feature sisters Paris Lopez and Jennifer Lopez.

“Jennifer can pass and spike from different positions on the court,” Cruz said. “They have been very effective. When nobody is putting the ball in, Victoria will set it and make it happen. She is also a strong server.”

The team has seven returning seniors this season.

“We are coming in strong this season,” Jennifer Lopez said. “We are very confident in the progress we have been making.”

The Eagles will face some stiff competition when they play Sabine Pass and Lighthouse Home School.

“I am anxious for the game against Sabine Pass,” Cruz said. “I want to see where I am. I am looking forward to all of the district games. I think after the Lighthouse game, we will be able to plan what we are going to do for the rest of the season.”

Gutierrez said the team is aware of each other’s strengths and weaknesses.

“We know how to work well with each other,” she said. “We know where each other are on the court and I think that will help us a lot.”

The Eagles take on Sabine Pass Tuesday at home. The game starts at 6 p.m..

“That is the level we are going to see in state,” Cruz said. “I want to see how they play. We haven’t played Sabine Pass in a year. Last year, we lost a game to Lighthouse.”

Cruz said he hopes the competition will lead his players towards their goal.

“After working these five years with them, I think we are ready to be state champions,” he said. “…They know what I expect from them. I think the experience is going to help them… The players I have this year are the ones I expected to have last year and they couldn’t play. We should have a more solid team this year. They are also more mature.”