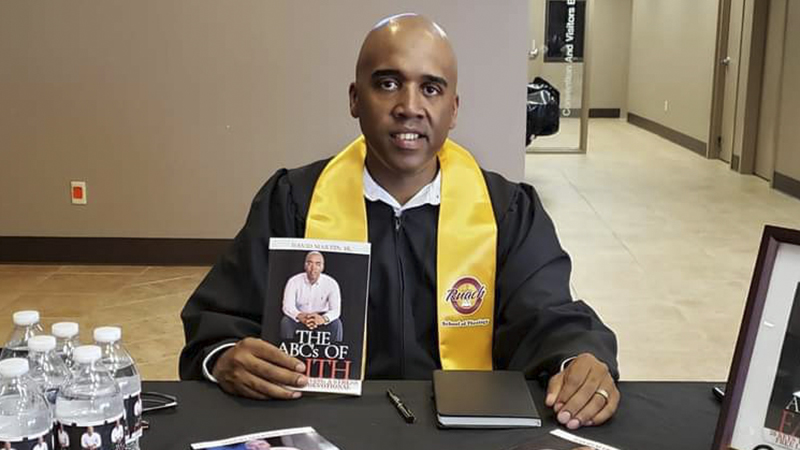 David Martin Jr. with his book, “The ABC’s of Faith,” in a photo taken recently after his graduation from Ruach School of Theology. (Courtesy photo)

David Martin Jr. was in high school when he began experimenting with drugs and alcohol and was pretty much addicted until around the age of 30.

But he is a different man today.

He credits his mother’s prayers and God’s intervention with bringing him from the depths of addiction to a husband, father, theology graduate and now author.

The Port Arthur man’s journey to redemption began when he was led to Jirah World Church on Procter Street. The church had a job program there and he needed a job.

“I went to that church for the job program and was still addicted to drugs so I couldn’t get a job,” Martin said. “But I started going to the church. I believe God used the job as bait to get me in there.”

At his lowest point, Martin was abusing marijuana, alcohol, Codeine and taking pills: Xanax, Vicodin, Lorcet and Soma. He abused cocaine and even smoked embalming fluid, he said.

Along the way around 2006 he was charged with a felony and sentenced to eight years deferred probation but was released from that in four years. 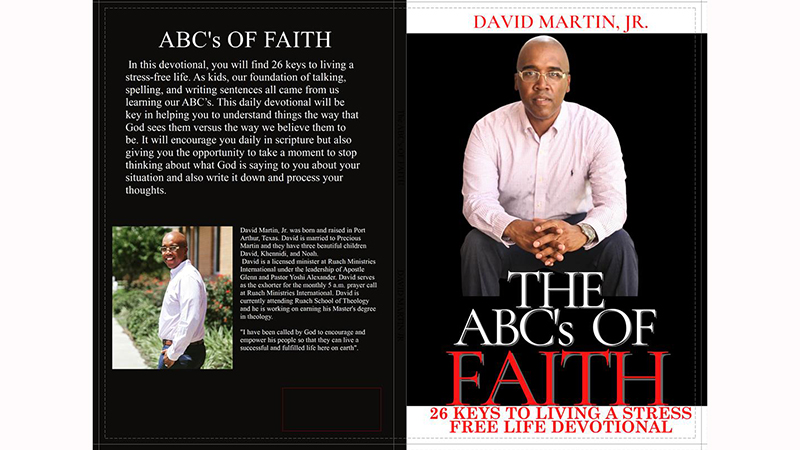 The front and back cover of Martin’s book. (Courtesy photo)

Cleaning up his act

“The next thing, I didn’t have a taste for drugs or alcohol,” he said, adding he did not go through withdrawals.

Soon he began teaching at the church. He got a job at B&B Ice making deliveries and then got a job in a refinery — something he couldn’t do before because of the felony on his record.

He was working and teaching, and in 2017 married his wife Precious and switched to her church, Ruach Ministries in Port Arthur.

The church also features Ruach School of Theology, from which Martin later enrolled and recently graduated with his bachelor’s degree in theology. His next goal is obtaining his master’s degree.

“It’s like God took my life to a different level. I have three kids now and am learning how to be a husband,” he said.

Constants in his life

His mom, Vanessa Martin, supported him physically and spiritually.

He credits her for her prayers and not giving up on him, even when he was at a bad point in his life. She never admonished him.

“The love from my mama gave me the hope for change, she had encouraging words for me,” he said. “I believe it was her prayers, when the world was telling me I wouldn’t be nothing, my mom said I would be something.”

Nicknamed “Punchie,” Martin was told by his mom that he was “just living for himself.”

“She never explained it. I didn’t understand it then. I understand it now,” he said. “I was protected in those hard times when I could have died because somebody needs to hear this. That really pierced my heart because the whole time I was doing wrong I felt like I was just hurting myself. I didn’t love myself so I didn’t mind hurting myself but I didn’t want to hurt my mama.”

His wife, Precious, also had her own spiritual journey. They two dated back when they were 20 and 21 for three years but it wasn’t meant to be at that time.

They split up for some years but remained friends. They were brought together again in 2016 as they dealt with their own spiritual paths. They married in 2017.

Through the years Martin has done some preaching and has a daily motivational page on Facebook — David’s Daily Motivation.

He had talked of writing the book and it was his wife who gave him the final nudge to complete it. He said he is not computer savvy so he didn’t know anything about publishing a book.

That’s where Crystal Batiste of Port Arthur came along. With her skills she was able to get the book published, Precious said.

Then Precious had the books ready for her husband after his recent graduation from Theology school.

“He called it a book, I call it a daily devotional,” she said. “It’s something you can look at daily, it doesn’t matter which page.”

The book features a word beginning with each of the letters of the alphabet and scripture. The subtitle comes from the fact there are 26 letters in the alphabet and each letter is a different key to unlock different doors to take stress out of your life, he said.

The minister is ready to sell his books with the goal of giving his testimony as a public speaker.

To purchase a book or reach Martin for speaking purposes, go to David Punchie Martin or David’s Daily Motivation on Facebook.