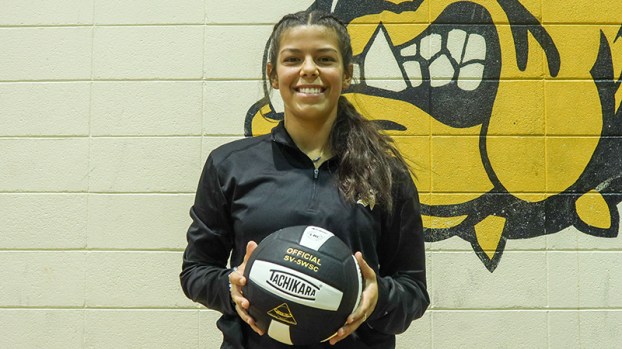 NEDERLAND — As a freshman, Nederland volleyball player Katie Perez was thrown into the fire to play with the varsity. Now, heading into her fourth season with the Bulldogs, she hopes to lead the team on a deep playoff run.

Perez said her time as a freshman was intimidating but invaluable.

“They were all seniors and taller than me,” Perez said. “I was nervous and didn’t want to make a mistake. I was tight playing. I slowly started relaxing and getting used to them and knowing how they really are.”

Perez started playing volleyball in middle school. She always wanted to play because she would watch her friend’s sister play for Nederland.

“She steps into that leadership role very well,” Crommett said. “When she sees that stuff needs to be taken care of, she doesn’t have a problem saying something. She is assertive, but it is never overbearing.”

Perez said her competitive side drives her to be more vocal.

During her freshman campaign, Perez asked to be moved back to JV to get some playing time to play six rotations and improve.

“She wanted to get in that rotation of not coming off the court,” Crommett said. “Then, we moved her back up to varsity at the end of the season and she has not come off since. It really benefitted her and I think she knew that to be one of the best ones, she was going to need to play all of the way around.”

It is fairly common to have high school players in almost every sport work back into shape when the summer programs begin. However, Crommett said Perez comes into workouts ready.

“During the summer, we already had workouts and open gym,” Crommett said. “She would go workout at 6 a.m., then come to summer workouts, then come work summer rec, then come to open gym. As far as dedication goes, there is not anyone more dedicated than her… She was literally on vacation and sent me a picture of her working out while she was on vacation.”

When not on the volleyball court, Perez can be found playing beach volleyball. She said playing on the sand lessens the fear of diving for balls.

“We will always hustle and dive even for balls we know we can’t get a touch on because it is on the sand,” she said. “But now we dive on the court no matter what now, because we are just used to it.”

Perez also strives to excel in the classroom, too. She said her favorite subject is math.

“It has always come easy to me,” she said. “I am probably best at that. I always would tutor my boyfriend. Numbers have always worked really well with me. My friends would always struggle with math and I didn’t understand why.”