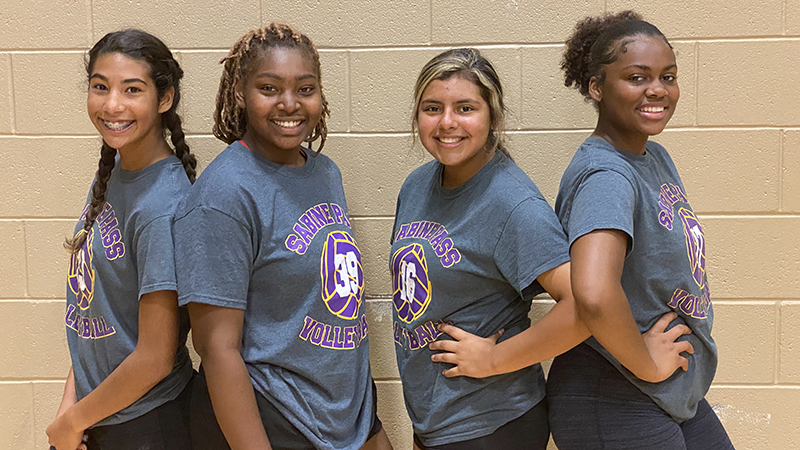 SABINE PASS — The Sabine Pass Sharks are in a rebuilding season after four players transferred out of the district . Now the team is focused on improving and creating a winning environment.

The team has only two seniors, but head coach Andie Corkran likes how the team looks.

“I got a couple of juniors. Most of my squad is sophomores, and they are so eager to learn,” Corkran said. “It is going to be tough, but we have a lot of goals. I am excited about it. We are going to do our best, and I have high expectations. They are ready to take over and want that leadership.”

The coach said she wants her team to be competitive against some of the district’s top-tier programs.

“I am really excited for the season to start,” Randolph said. “I think we will be able to show our potential.”

Velacruz said the team has the ability to be good for the next few years since the majority are underclassmen.

“I think we have a chance to be more advanced than the others because we are so close and can grow together,” she said.

The team’s youth does not make them shy away from challenges. Overstreet said she is anxious to see how the young squad stacks up.

“I am looking forward to playing Evadale,” she said. “They are one of the hardest teams to play in the district.”

Corkran said her goal is to make the playoffs and gain some much needed experience.

“We want to be successful and get some wins out of district,” she said.

The coach said she is excited about the challenging schedule.

“Chester is always a good one,” she said referencing the team’s first game. “Tuesday is coming. We play Bob Hope and Lighthouse. We play Legacy right before district and that will be a good game.”

The Sharks kick off the season at home against Chester at 4:30 p.m. Tuesday.