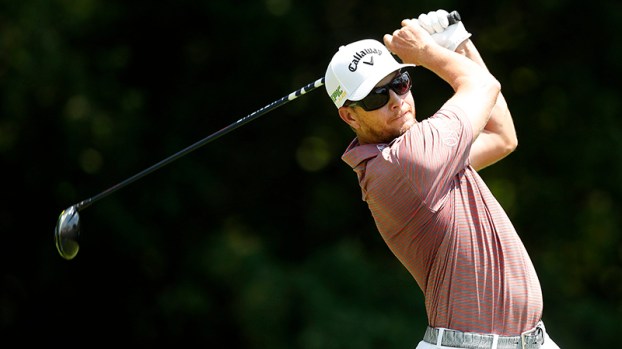 Chris Stroud hits off the second tee during the final round of the John Deere Classic golf tournament July 14, 2019, at TPC Deere Run in Silvis, Illinois. (Charlie Neibergall/AP)

Chris Stroud’s plan of returning to competitive golf by playing in the Korn Ferry Tour’s Utah Championship that starts Thursday has been derailed. Stroud, who has been away from competitive golf since last November, was forced into a change a plans when his lower back locked up a couple of weeks ago while lifting weights.

That’s the bad news. The good news is the doctor who provided the Airrosti treatment written about in this space in mid July was able to treat the issue without it lingering. Stroud said he was back hitting balls in seven or eight days and is playing again on a regular basis.

What has changed is that his weight-lifting days are over and he won’t be playing in Utah.

“I’m using resistance bands much like Tom Brady does,” said the Port Neches-Groves ex. “I think what’s happened is after so many years of lifting the muscle fibers have changed and maxed out. Going forward, I must have a different approach with stretching and balancing and using bands.”

Stroud admitted that, after so much rehab, and feeling he was ready to go, the latest setback left him briefly down and despondent. After the quick rebound, however, he’s chosen to view everything in the past year as a career reset, and to value the extra time he was able to spend with his wife and daughters. He says he’s confident better days are ahead.

So, when will Stroud be able to play on the PGA Tour again? His latest target is the Sept. 16-19 Fortinent Open (formerly Safeway Open) in Napa, California that kicks off the 2021-22 schedule. Because of his status coming off a medical exemption, though, he probably won’t know he’s in the field until perhaps two weeks out.

Due to the fact the top 125 in Fed Ex Cup points and 50 players from the Korn Ferry Tour are ahead of him in the pecking order, it’s going to be a waiting game most weeks. The only way he can move up in status is to post some good finishes and rise in periodic reshuffles.

“As long as I’m healthy I plan to try to Monday qualify whenever I don’t make it into the starting field,” he said. “Staying healthy is the key. I know I can still play well enough to be competitive.”

CHIP SHOTS: Aaron Landry of Groves earned extra bragging rights on his first ever hole in one Saturday at Babe Zaharias.

Landry, you see, not only was able to write a 1 on his scorecard he also got to claim it as an albatross (double eagle) because it came on the par 4, hole 6th.

The listed scorecard distance from the white tee on No. 6 is 351-yards. That, however, is the yardage if the hole is played as designed – a dogleg left. Landry, like most big hitters, went directly at the green, clearing trees and houses in the process.

Witness to the ace/albatross were Jordan Leger and Jordan Soper.

Congratulations to Kaitlyn Papp of Austin for winning the W.L. Pate trophy as champion of the Second Annual Babe Zaharias Open at Beaumont Country Club. Papp authored a 15-under 273 to win the Women’s All-Pro Tour event by one stroke over Sofia Garcia.

For the first time the Monday Senior 50 Plus game at Babe Zaharias was contested in a best three ball format. Winning the front with minus 1 was the team of Bob West, Gary Fontenot, Troy Touchett and Dwayne Benoit.

There was a tie on the back at plus four between the team of Rick Pritchett, Joe Gongora, Adam Noel and Darrell Mouille and the foursome of Russ Gloede, Larry Johnson, Ron Mistrot and Dan Flood.

In the Super Saturday 2 ball at Zaharias, the team of Gene Jones, Earl Richard, Jeff Rinehart and Everett Baker won the front with minus 3. There was a four-way tie on the back at even par among teams captained by Price Youngs, Jim Cady, Cap Hollier and Jones.

The Friday 2 ball at Zaharias saw the team of West, Johnson, Don MacNeil and a ghost player take the front with minus 3. That was also the winning score on the back for the team of James Vercher, Mistrot, and Dan Harrington.

Wednesday’s Zaharias DogFight was played in an all-points-count format. Placing first with 35 points was the team of Bob Luttrull, Lee Bertrand, Larry Reece and Richard Menchaca. Second with 32 points was the foursome of Fontenot, Rufus Reyes, MacNeil and Ron Doty.

The Tuesday, July 27 2 ball saw the team of Hollier, Richard, Pritchett and Glenn Knight tie the front with minus 4 and win the back win at minus 3. Also posting minus 4 on the front was the team of Vercher, Bobby Wactor, Jeff Rinehart and Baker.

Taylor Made is hosting a fitting day next Wednesday (Aug. 11) from 12 noon to 4 p.m. at Babe Zaharias. Players who sign up will experience a 1-on-1 tour-level custom fitting of Taylor Made clubs. Contact the Zaharias golf shop at 409 722-8286 to book a fitting.