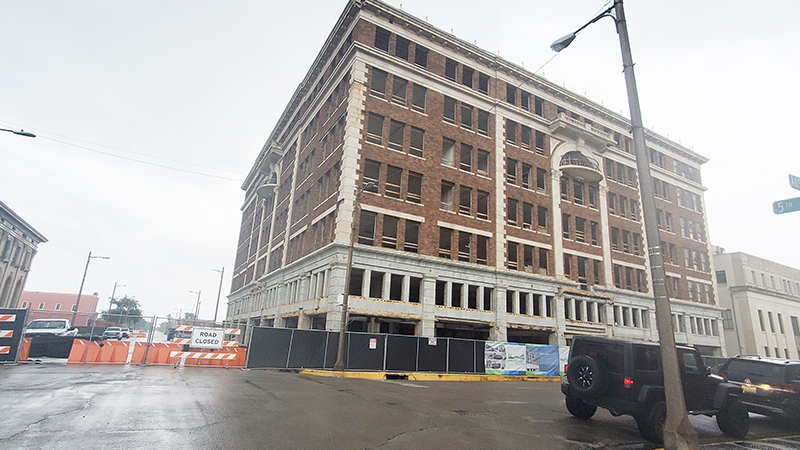 A view of the old Adams Building on Austin Avenue. The building is owned, along with several others, by Motiva Enterprises. (Mary Meaux/The News)

Recent activity at the Motiva Enterprises-owned buildings in downtown Port Arthur likely raised some eyebrows — and led to some excitement.

But the flurry of work isn’t crews resuming construction on the two historic buildings, city leaders said. Instead it is work to cleanup and prepare the properties for the hurricane season.

Port Arthur Mayor Thurman Bartie said he was contacted by a representative of the company Friday explaining what was going on.

He said as far as he has been told there is no set time for the company to return to the original intent for the buildings’ reconstruction.

Motiva provided a statement on the topic:

“We are currently awaiting historical designations from both the state and federal government. Although the renovation timeline has been slowed, downtown Port Arthur is still the future home of a Motiva campus that will provide much needed office space for employees and contractors who are not directly involved in site-specific maintenance or operations,” the statement read. 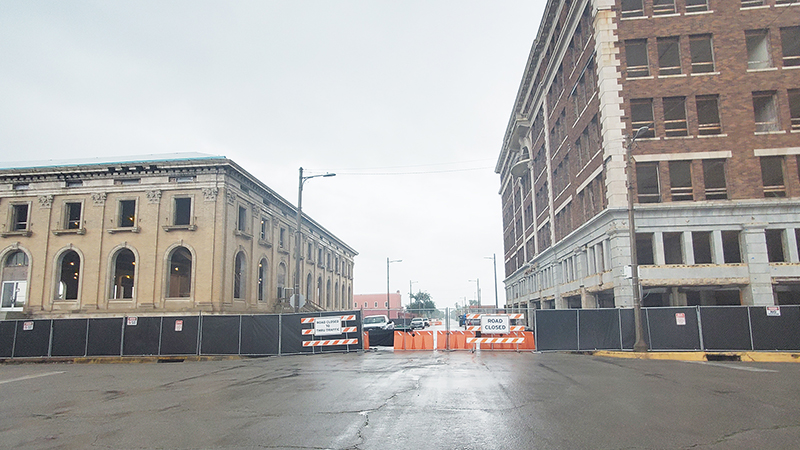 Lights can be seen in the old federal building on Austin Avenue, left. (Mary Meaux/The News)

A regional television news report this week indicating construction has resumed at the location was premature, according to city and company officials.

Rumors began circulating in late March when construction on two historic buildings purchased by the company came to a halt. Motiva purchased the Adams Building and Federal Building on Austin Avenue two years ago after announcing in 2017 that it was investing $12 billion in the expansion of the Port Arthur refinery, creating as many as 12,000 jobs.

In April, Jay Hall, Motiva’s deals manager for strategy and business development, addressed the city council, saying work stopped but the company was waiting for the current historical zone to be approved by the state and federal government.

Hall said in the meantime, the company has been working on the internal and external architectural designs so it can “hit the ground running” once the certificates arrive.

Originally, the buildings were expected to be complete by the first quarter of 2022. Because of the delay, that timeline could now extend to early 2023.

Bartie, at the time, noted Motiva is a private land owner and does not owe the city any explanation but, out of mutual respect, believes the company should have communicated earlier it had stepped back from the work.

The communication on Friday was appreciated, he said. And though the project is not vacated, the city is in limbo as to what Motiva is going to do.

“They did respond in the way I requested,” Bartie said of the call. “We would hope and pray that they will return to the original intent of Reimaging Port Arthur, the intent of housing 500 to 800 persons in offices in those buildings in downtown Port Arthur.”

The Greater PA Chamber of Commerce is housed in a historic building on Procter Street adjacent to the old Adams Building. Chamber President and CEO Pat Avery noticed the activity at the nearby buildings from an office window and was excited, she said.

“It’s going to be great having them right next door and start this renaissance downtown,” Avery said. “I can’t wait.”