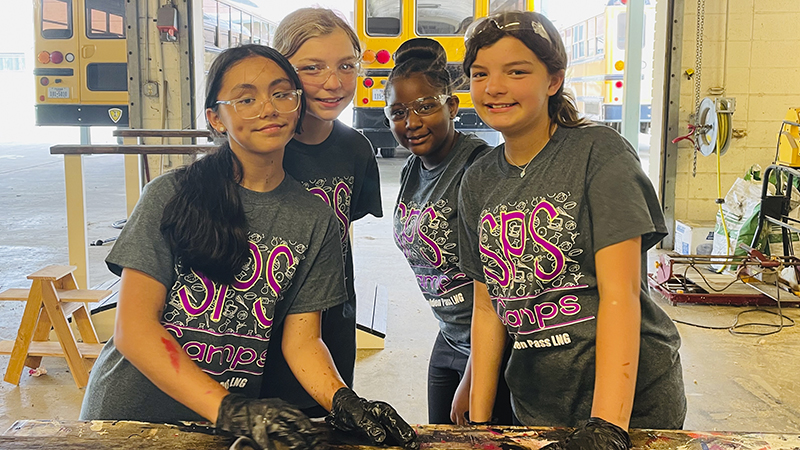 SABINE PASS — Many of the students at the summer program in Sabine Pass were not even born when Army Spc. Ryan Berg lost his life while serving in Iraq but they understand the impact his life and death made on the community and beyond.

But this didn’t stop the youngsters from taking on a project in Berg’s honor — the restoration of a bench at the school’s sports complex.

The idea came from Sarah Cropper, PE coach/assistant softball coach who noticed after Hurricane Laura that the bench looked a little rough, she said. She also wanted to do something special for Berg’s family.

“So I figured Shark Camp would be a great time to get it done with the kids’ help, especially the ones that were part of his life,” Cropper said.

The Sabine Pass Shark Summer Camp is an annual event where children in pre-kindergarten to fifth grade learn new things in a fun setting. One day the older children will spend the morning working on sports while the younger ones are outside on the playground. After lunch they go to different teachers, where they create crafts associated with what they are learning.

Saunders explained why he wanted to be part of the rehab of the bench.

“Ryan is my cousin and I support him and hope he is looking down on me,” Saunders said.

Doing the work made him feel better because the bench was in need of repair, he added.

“I wanted to be a part of the project because I wanted to help make it look newer for Ryan,” she said. “It makes me feel good that I helped repair the bench in honor of him and his memory. You should always help out one another without being told to do so.” 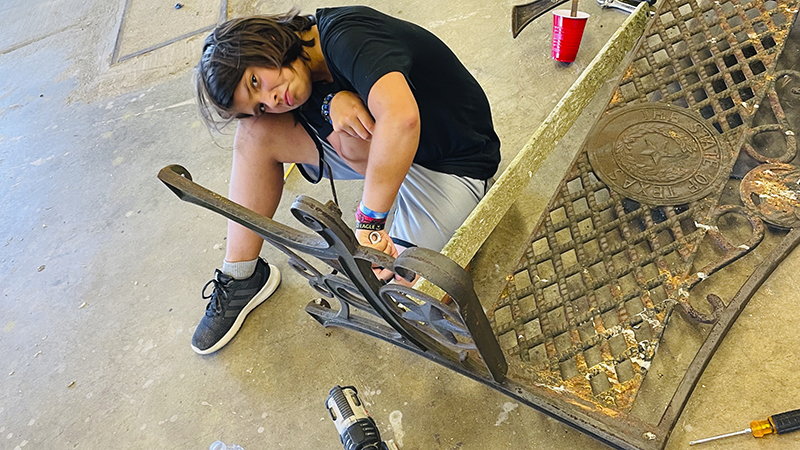 Cropper said they were lucky to be able to keep all of the original pieces.

“We broke down the bench completely and sanded down the wood areas and put a dark stain on each piece. The sides and back metal pieces were sprayed and cleaned off from any unwanted rust, then also painted with a dark cherry red stain,” Cropper said, adding it is only missing a few bolts and screws.

“As soon as I find those I can finish putting the back on.”

The rain delayed the finishing steps to the work, but Cropper is hoping to finish it this week. 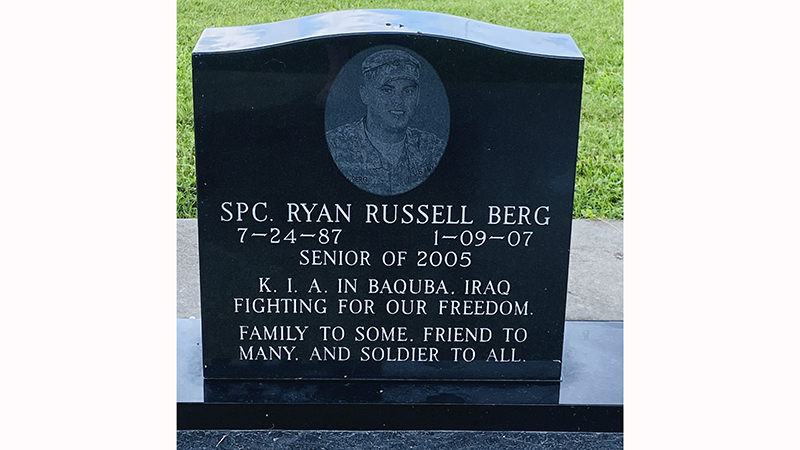 Scottie Ray, Berg’s mother, works for the school district and was happy to learn the Shark Camp would take on the project.

“It warms my heart,” Ray said. “It’s been 14 years. The kids that went to school when Ryan passed through, the majority are gone but all the kids known who Ryan is. They know he’s my son.”

A portrait of Berg hangs in the front office of Sabine Pass School and a photo of him with his birth and death dates remains in an area where announcements are posted.

“Even the new children that never met him or his brother or sister still know who he is, who Ryan Berg is, his sacrifice and our sacrifice is remembered every day at the school and the whole town of Sabine Pass,” she said.

He died Jan. 9, 2007, in Baqubah, Iraq of wounds sustained when his unit came into contact with enemy forces using small-arms fire, according to Military Times.

He was a 2005 graduate of Sabine Pass High School.

At the time of his death he was recently married with a child on the way.