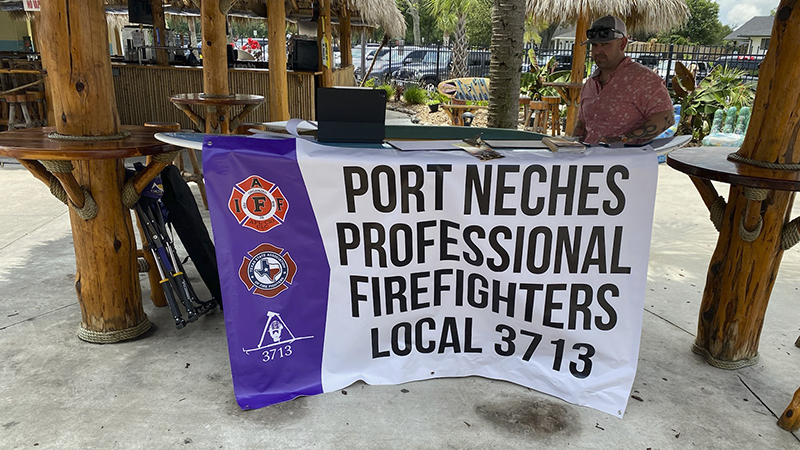 Jared Jones mans the petition table during an event in June. (Courtesy of Tyler Hebert)

Members of Groves and Port Neches professional firefighters associations are out and about seeking signatures from registered voters in their respective cities for a petition in order to make some changes.

The groups are hoping to follow suit with fellow firefighters in Port Arthur, Beaumont, Nederland and Orange and move to collective bargaining and binding arbitration.

You may have seen their tables out at Groves and Port Neches businesses recently, and the last minute push is on to secure valid signatures to put the issues on the November ballot. Monday is the deadline to turn in the signatures.

In Groves, the association needs to collect the signatures of 333 registered voters who reside in the city to put collective bargaining on the November ballot.

For binding arbitration, which is a city charter amendment, firefighters need 455 signatures from registered voters in the city.

In Port Neches, the association is seeking 348 signatures of registered voters in the city.

Collective bargaining gives members of the International Association of Fire Fighters — which they are — a chance to actively negotiate a contract. During the process, according to information from the groups, representatives of the union and city meet and negotiate issues important to both. Once both sides come to an agreement over wages, hours, fringe benefits, discipline and working conditions, a written contract is made.

Binding arbitration is a way to settle labor-management disputes by having a neutral third party or panel hold a formal hearing, take testimony and render a reward, according to information from the groups.

The two associations want it known that should these issues be approved by voters, it will not raise taxes nor does it mean they are unsatisfied with their respective city administrations.

Haden Grove, president of the Groves Professional Firefighters Association, said the firefighters believe if they are successful in gaining collective bargaining and binding arbitration then they will continue to be the best and most professional fire department.

And, they will be able to continue to hire and retain the caliber of professional firefighters that we have had for years.

“Recently the City of Nederland and their Police and Fire Associations were able to successfully negotiate a contract that was beneficial to the city and firefighters and police officers,” Grove said. “We want that too: A bunch of professionals working together towards a common goal to better the city. In the end, the citizens will be the winners. That’s most important.”