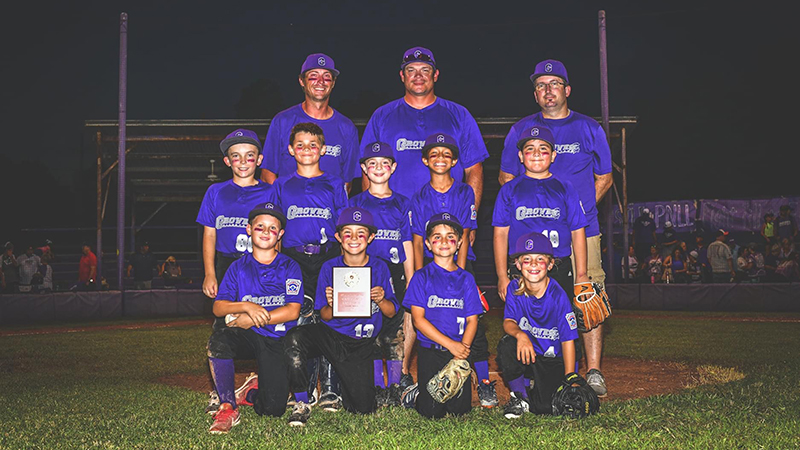 GROVES — The Groves National Little League All Stars earned the district championship over the weekend by defeating Port Neches for the second time.

The team scored a 15-2 win over Port Neches in their first meeting, sending PN to the losing bracket. PNLL fought their way back to the championship game by defeating Nederland.

Groves NLL President Ruthie Wolfe said she is happy the way the season is wrapping up, despite seeing a year with reduced participation.

“Last year, we had to cut our season short with COVID,” Wolfe said. “This year, our registration was down some, so we didn’t have quite as many kids as we normally have.”

This year’s 8-year-old boys team had nine players on the roster.

“There was a lot of rain and we were doing a lot of makeups,” she said. “Besides that, I think we had a really good year.”

The league began registering in January, which was a few months before the state opened back up.

“Other leagues in the area are down also,” Wolfe said. “Kids are either not coming back to baseball or staying home because they are afraid. We started out with everyone wearing masks and social distancing. We only had one game a night, because the city wanted us to clear the stands and have everyone moved out before the next group of people came in. It was a whole lot to take care of.”

When Governor Greg Abbott lifted the COVID mandates in the spring, the little leagues elected to continue their protocols to finish the season.

“I think it went well and we were able to put together our five all-star teams,” Wolfe said.

While the 8-year-old boy’s league wrapped up their season, the older groups will finish their seasons over the next few weeks.