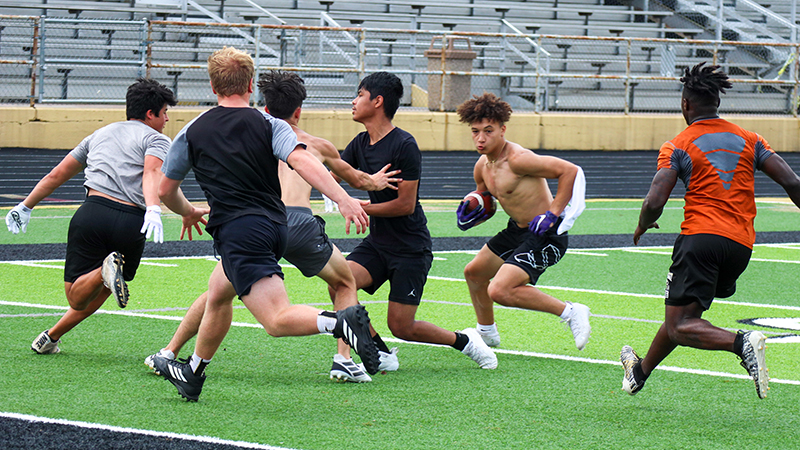 NEDERLAND — For the first time this summer, the Nederland Bulldogs were on the turf at Bulldog Stadium.

The offense and defense split in 10-minute intervals to work the same concept before testing their training against one another.

On Monday, the defense practiced switching assignments when an offensive player goes in motion before the ball is snapped. The offense practiced running motion plays near the goal line. 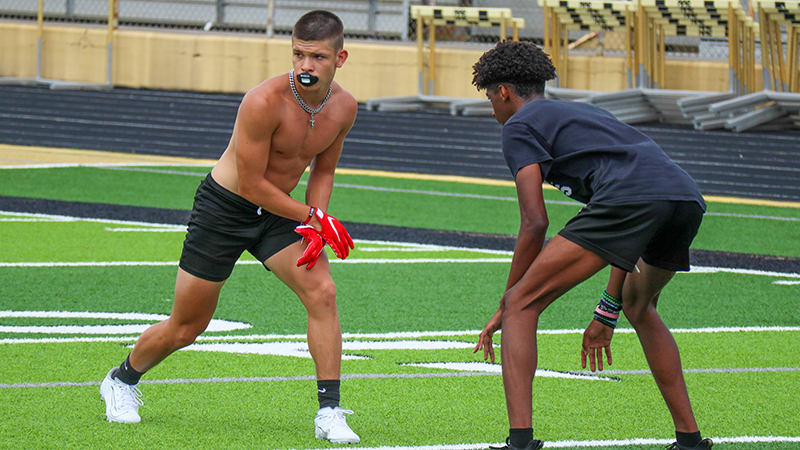 Nederland’s Evan Ceja, left, and Travis Jackson line up across from each other at Monday’s practice. (Chris Moore/The News)

The two then practiced against each other.

“Anytime there is an actual football involved, you feel like you are actually playing football,” Head Coach Monte Barrow said. “The weight room and running is all part of it, but the kids have more energy when a ball is involved and working on actual football stuff. Hopefully they will keep that energy throughout the summer.”

“(The defense is) working on man and bumping,” Barrow said. “We are working on motion in that area, so when we go against each other, we are both working on something and we are getting something out of it.”

Barrow said they are trying to simulate a game-like and fall practice as much as possible.

Nederland quarterback Luke Broussard was happy to be back on the field.

“Some of these guys were on varsity last year, so I didn’t get a chance to throw to them,” he said. “Now that we are out here as a team, it has really helped a lot.”

Broussard worked with the receivers on a variety of routes in the individual phase of practice.

The senior quarterback said playing with the 7-on-7 team has helped get the timing down with the rest of the offense.