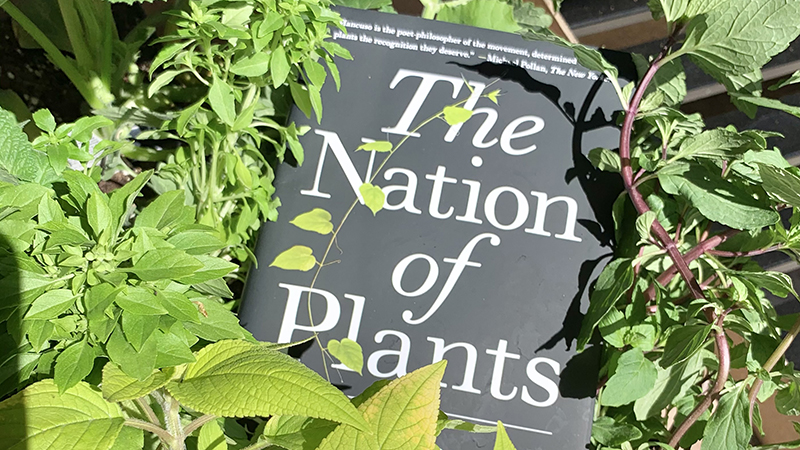 “Nation of Plants” shares what plants would ask of us. Remember, they feed us. (Darragh Doiron/Special to The News)

Someone called us new parents as we bragged about keeping an eye on little zucchini developing on our patio.

While we’re not sitting around talking to our succulents, we consider that plants “grow” on you, and often have dramatic tales. In “The Nation of Plants,” plants create the first Universal Declaration of Rights of Living Beings.

They want respect in this earthly world of climate change.

Stefano Mancuso is a leading authority in plant  neurobiology, which explores plant signaling and communication. Don’t dismiss this. Of course we want plants to thrive. They feed us.
Consider some of the anecdotes within: Did the fortunes of England depend on cats?

By nourishing themselves on mice, cats increased survival of bumblebees, which pollinated shamrocks that nourished beef cows for British sailors, permitting the British Navy to… Get it?

Then there’s the prickly pear, which attracted an insect that the Aztecs used to make a carmine red. Spain guarded the process even as the English used it to make their red coats.

Someone thought about reproducing the cactus-insect climate in Australia to get more dye, but the prickly pear went wild, invading cultivated land.

Burning, rabbits and mustard gas were considered to stop the spread. Each added more problems.

Plants deserve respect, and here are two products that will help us respect the gift of plants on our plates:

Super Crisps, in Vegan Cheese by Orga Foods, is the kind of snack that is versatile, but they can’t seem to last longer than a rip and a munch.

Rip open the bag and try to control yourself. Addictive seed crisps with chia, sunflower, sesame, flax, etc. can be cracked onto salads, spread with guac and hummus and served with soup.

It’s a good thing they put the serving size on there or else you’d be tooooo tempted when you unleash the contents of that bag. Garlic & Onion is my second fave.

The seed clusters look like an edible mosaic. The cracker itself is artistic.

How could it get from this Echo Park, California, bakery’s classic original menu, be “shelved” for 30 years in favor of individual guava strudel and come back to arrive on your doorstep?

It doesn’t end there.

Pull this flat pie from the box and aim your phone’s camera at the code to get the specs on baking it. I was impressed to the heights this flaky crust rose.

It at least doubled in size. The flavor was so good that my husband and I each had a piece as an appetizer.

Then we had a main course of rice and veggies and went in for a second piece of Rosa’s creation. That left some for breakfast and the next day’s coffee break.

Pie gone. Thanks Rosa, that was a treat. Learn more at portosbakery.com/bakeathome.

Darragh Doiron is a Port Arthur area foodie who is rewarded with herbs and floral beauty when she plays in the dirt. Reach her at darraghcastillo@icloud.com.