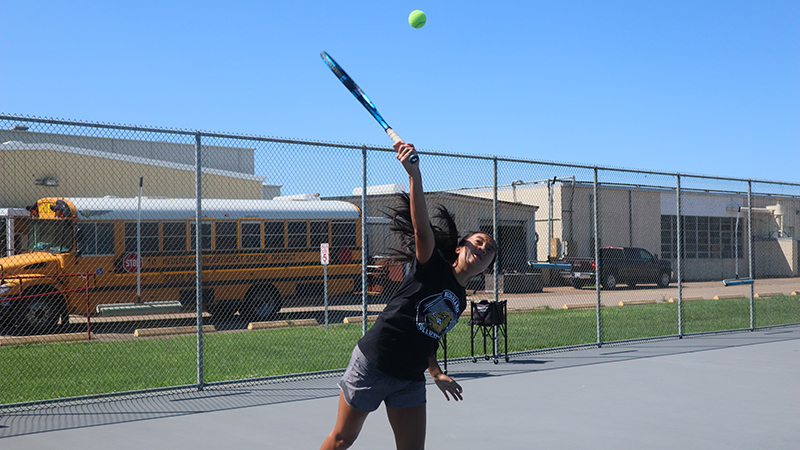 Nederland tennis player Megan Do made it all the way to the UIL 5A State Championship game before falling in two sets Friday.

Her coach Jorge Lopez said he was proud of the way the junior preformed.

“I think it is a great accomplishment,” Lopez said. “She is only a junior and she has another chance at it. We did everything right coming into the match. I think she improved, even from regionals. I think she had a chance to win the match…(Thursday) she played really well. She fought and fought. In the first set of the second match, she played the best I have seen her play. She played amazing. Overall, I think it was a good tournament.”

Do said she was surprised by how far she made it.

“It was a shocker, really,” she said. “I wasn’t going in expecting to get anything. I tried my best and I made it to the finals… I think this will give me a lot of motivation for next year. I know what I need to work on and what to push myself towards. I have a higher expectation for my outcome for next year.”

Do said the final match on Friday was physically challenging.

“I had two really tough matches the day before, but I went out there and gave it my best,” she said. “Unfortunately, I didn’t pull through.”

Lopez said Do was cramping prior to the match.

“In the morning, she had low energy,” Lopez said. “She was still cramping from the day before. As the match progressed, she was able to loosen up and played much better. By that time, though, it was too late. The other girl had gained too much confidence. The other girl was also a really good player. She played at a high caliber. She went for every shot.”

In the regional tournament, Do defeated Crystal Zhou, who was the No. 1 seed from Austin Lasa. The match took nearly four hours, Lopez said. Do won 6-4, 4-6, 7-6.

“I know what Megan is capable of,” Lopez said. “I know she can win state. I think this will help her get better. That is going to be the reason why she lost. That is the way we feel about it.”